US elections: Donald Trump wins the race for the White House 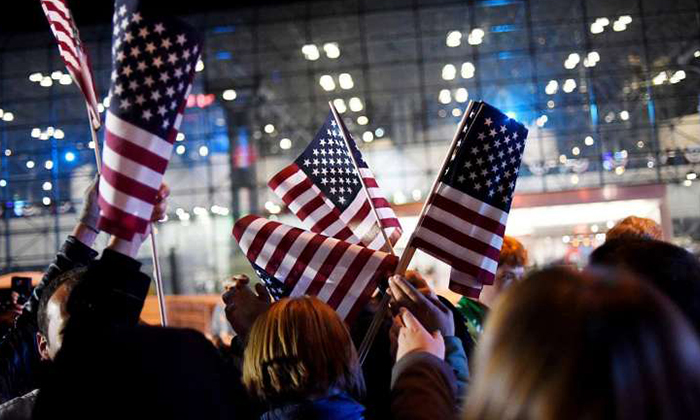 Republican Donald Trump has pulled off a huge electoral  victory over his Democrat rival Hillary Clinton to become the 45th president of the United States.

At age 70, the man will be the oldest American president.

Mrs Clinton called Mr Trump to concede the election, according to CNN.

Mr Trump had started the night as a underdog but made gains as vote counting progressed.

Clinton advantage among minorities and women looks have been trumped by the Republican's appeal among white working-class voters.

Trump supporters at the Hilton hotel in midtown were constantly cheering as the results started to come in, while Clinton supporters in the Javits Convention Centre were decidedly more nervous.

A packed crowd in the lobby of Mr Trump’s new hotel in Washington D.C. chanted “lock her up, lock her up”, referring to Mrs Clinton who was investigated by FBI for using her private e-mail in her work while she was secretary of state.

During election day on Tuesday, long lines were seen at many polling stations across America.

There were no signs of the voter intimidation or cyber attacks that many had feared, although some stations in Utah and North Carolina had to resort to paper ballots due to technical glitches.

Some voters in the more populated precincts across the country reportedly had to wait for up to three hours to cast their ballots.

Speaking after casting her vote in her hometown of Chappaqua, New York, Mrs Clinton said voting was the "most humbling feeling" because of what was at stake in the election.

Mr Trump, after casting his vote in Manhattan, said that he was buoyed by the "tremendous enthusiasm" he has seen.

Polling heading into election day had given Mrs Clinton an edge although pollsters warned that Mr Trump could not be written off.

Statistician Nate Silver, who founded the polling forecast website fivethirtyeight.com, noted, for instance, that this year's forecast featured a higher than average level of uncertainty due to the high number of undecided voters.

He noted that it would not take a drastic polling error to wipe out the approximately three percentage point lead that Mrs Clinton holds in the polls.

"In three of the last five presidential elections, there was a polling error the size of which would approximately wipe out Clinton's popular vote lead - or alternatively, if the error were in her favour, turn a solid victory into a near-landslide margin of 6 to 8 percentage points," he wrote.

Much will be determined by who did a better job of getting their core supporters to the voting booth.

The Trump campaign had on Tuesday filed a legal challenge against a Nevada polling station for staying open past its scheduled closing time during early voting.

Politico reported that it is seeking an emergency court order to set aside the ballots and voting machines from the early voting sites so it can be adjudicated after the election. A judged later dismissed the challenge.

As polls closed on Tuesday, the buzz around the sites of the victory parties in New York began to pick up.

Heavy security was evident around the Hilton Hotel in midtown New York where Mr Trump held his election night party.

The building was ring-fenced by heavy tipper trucks and metal barriers. Mr Trump's event is open only to invited guests.

Over at Mrs Clinton's election party venue at the Jacob Javits Convention Centre, thousands of supporters waited patiently to get in.

Some were dressed for a celebration, sporting "America Is Already Great" caps, and buttons proudly labelling themselves "nasty woman" - Mr Trump's description of Mrs Clinton in the third debate.

For security reasons, supporters were not allowed to bring food, water or selfie sticks into the centre.

Ms Cait Smith, 30, a healthcare professional, said she voted for Mrs Clinton at noon and immediately headed to the party venue in New York.

"I really want to be in there. Since I've been a kid, I've been a big fan (of Mrs Clinton)," said Ms Smith, adding that she appreciates her agenda "in terms of women's rights and promoting healthy families".

Check out some of the videos on the elections below.