Politics must be clean: Yaacob Ibrahim disappointed with misleading photo on social media 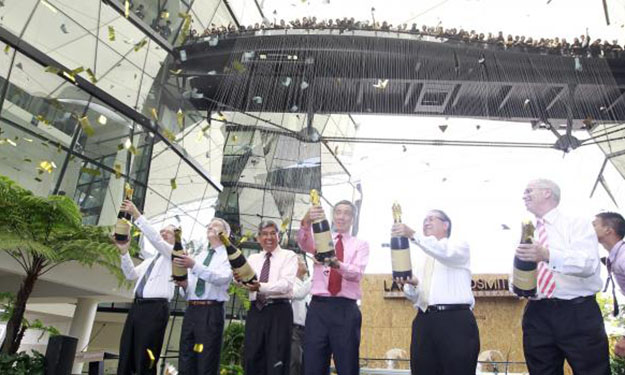 Minister for Communications and Information, and Minister-in-charge of Muslim Affairs Dr Yaacob Ibrahim stresses that it is important that Singapore practices clean politics.

According to a report in Berita Harian, Dr Yaacob was responding to a photo circulating on social media, which appeared to show him opening a bottle of champagne during a signing ceremony between Lasalle College of the Arts and Goldsmiths, University of London.

The photo, which was taken in February 2012, was taken from Prime Minister Lee Hsien Loong's Facebook page.

Talking to the media at the MUIS Awards ceremony on Saturday, Dr Yaacob said:

"I am disappointed because the photo did not tell the true story. The bottle actually contained confetti."

However, the confetti was not seen in the photo that was circulated on social media, added Dr Yaacob. The photo in question had been edited to remove the confetti.

The photo was also accompanied by another photo showing Workers' Party candidate Mr Faisal Manap leading his fellow party members in a prayer in an open field.

Dr Yaacob stressed that this is not the kind of politics that should be desired by Singapore.

He also hopes that the opposition will not advocate such politics in Singapore.