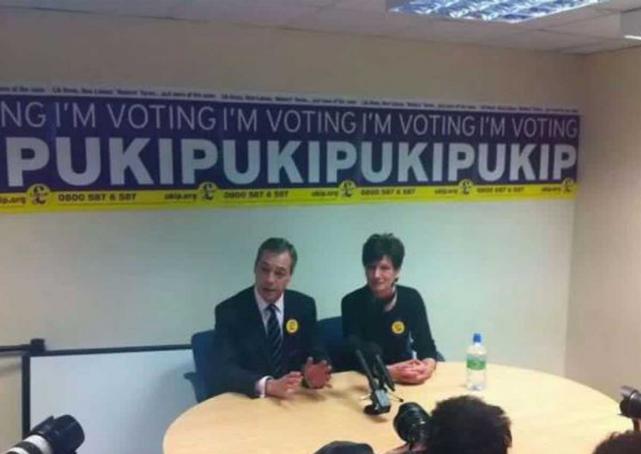 Leading "Brexit" campaigner Nigel Farage went viral in Southeast Asia Monday after he was pictured underneath a banner that accidentally spelt out a crude slang word for vagina.

The image showed the outgoing boss of the UK Independence Party - who lead the successful campaign to pull Britain out of the European Union - sitting under a poster that repeated the acronym UKIP with no spaces in between.

But Filipino and Malay internet users were quick to point out the banner also spelt - multiple times - 'PUKI', which is slang for vagina in both Malay and Tagalog.

"Farage and his UKIP partly leave Malaysians in fits of laughter," Malaysia's Star Online said, as it carried the picture of Farage under the banner.

Nigel Farage on Monday stepped down as leader of UKIP as the shockwaves from Britain's decision to quit the EU continue to rock the country's political order.

He said the Brexit vote meant he had achieved his political ambition.

"Nigel Farage has officially pulled out of PUKI... I mean UKIP," one Malaysian tweeted in response.