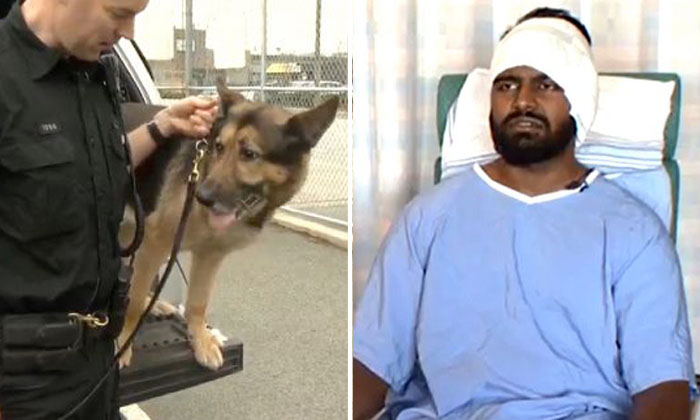 He was in the wrong place at the wrong time, and might have been wrongly identified as a suspect in a double homicide and kidnapping.

He ended up being attacked by a police dog that tore into him, ripping off his ear lobe and chomping on his thigh.

Mr Vicknesh Supramaniam, a 26-year-old Singaporean studying in Canada, kept shouting that he was innocent, but his cries went unheeded.

Mr Vicknesh was driving to a Home Depot hardware store when he heard sirens from a police chase and pulled over.

The white car that was being pursued by the police then crashed into his car.

The chase was part of a police operation relating to the murders of a man and woman in their home in East Vancouver, and the kidnapping of another man from the house, on Saturday night.

In an interview with Canadian news outlet Global News while recovering in hospital, Mr Vicknesh said: ''I started seeing smoke in the white Acura, and my instincts were not to stay in the car.

''The moment I got out, I heard shots and took cover behind a bus stop bench.''

The next thing he knew, a police dog was attacking him.

''The dog bit me and dragged me all the way down the hill. All I saw was just blood all over me,'' he said.

''I want them to answer for what they did.''

CBC news reported that a witness who came out of her home saw a police dog ''dragging a man down the little grassy hill''.

The witness also said she was later told that the loud bangs were stun bombs.

The dog ripped off part of Mr Vicknesh's left ear lobe, and left him with bite marks on his thigh.

On Tuesday, Vancouver police apologised for the injuries sustained by two innocent bystanders during the arrest of three suspects.

Without naming Mr Vicknesh, they said a male bystander suffered serious injuries after he was bitten by a police dog.

The incident has sparked demands by civil rights advocates for changes to police dog takedowns.

A Ministry of Foreign Affairs spokesman said last night that it was rendering necessary consular assistance to Mr Vicknesh and his family members.

Yesterday, Mr Vicknesh told The New Paper over the phone that he had been discharged from hospital and will be seeing a plastic surgeon today.

''I've been through a lot these few days. It's been a very traumatic experience that no one should ever go through.

''I want to put the past behind me and move forward with my health and (be on) the road to recovery,'' said Mr Vicknesh, who is taking a two-year programme in Vancouver to become a pilot.

The savage attack has now put those plans in limbo.

His brother, Mr Gunashekaran Supramaniam, 37, who helps their father run a minimart in Woodlands, said the incident had greatly affected the family.

''We work hard here to pay the expenses for him to study in Canada, and this happens,'' he said.

''I don't understand why they had to release the police dog on him. It's ridiculous.''

Mr Gunashekaran said their mother died of cancer two years ago, and their father, who is almost 70, was heartbroken to hear about what happened to Mr Vicknesh.

''He's very affected, and my brother's education and dreams are now on the line,'' he said.

He added that Vancouver police have yet to find the ear lobe that was torn off.

The youngest brother, Mr Gopinath Supramaniam, 25, who also helps out at the minimart, said Mr Vicknesh was supposed to graduate next year and return to Singapore.

''We've been talking to him every day through video calls,'' he said.

When asked if the family intends to fly to Canada to see Mr Vicknesh, he said that Mr Vicknesh lives with their eldest brother in Vancouver. That brother and Mr Vicknesh's girlfriend are looking after him.

''We trust that my oldest brother has everything under control, and even if we go over, we can't do anything,'' he said.

''It is also not advisable for my father to take a 22-hour flight because he is not in the best condition.

''We need Vicknesh to get well, and we're focused on what we can do next. We just want him to recover and carry on with life.''