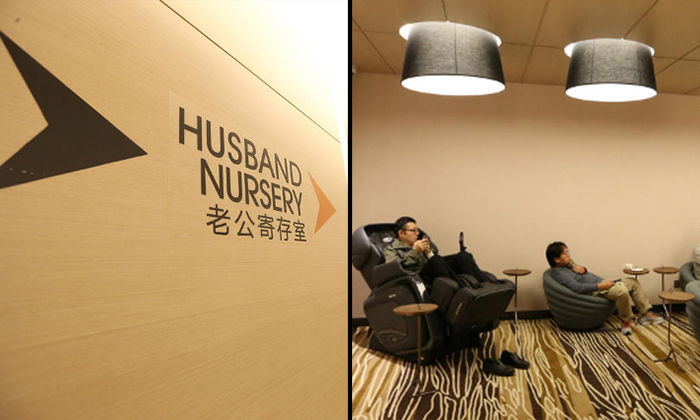 Men often complain about having to accompany their wives to shop, so this mall in Shanghai, China has opened a room to solve the problem.

The Vanke Mall has opened a "Husband Nursery" for guys to rest while their wives shop.

According to news163, the nursery is located on the third floor, the room features magazines, newspapers, television sets and massage chairs for the men to relax.

Netizens praised the idea, with one tired husband commenting: "Accompanying my wife to shop is more tiring than working."

Others relegated stories of their "shopping nightmares".

One befuddled man complained: "Everytime I accompany my wife to go shopping I don't know whether she's there to buy things or to just walk."

However others complained that the amenities were insufficient, with one asking: "No wifi?".

Related Stories
Are you 'oak-kay'? Woman in China rides on electric scooter with makeshift IV on a branch
Man knocks friend unconscious after he picked up the restaurant bill and "made him lose face"
Chinese woman convinces 20 boyfriends to buy her iPhone 7s --- then sells them all to buy a house
China
funny
husband
nursery