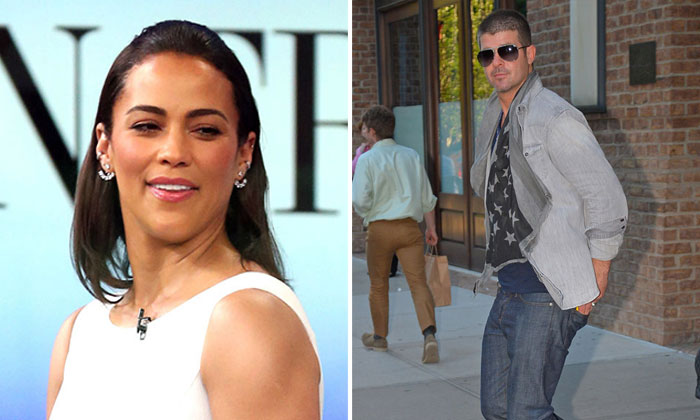 The 'Blurred Lines' hitmaker was accompanied by LA County Sheriff's deputies to his ex-wife's Malibu home on Friday (13.01.17) morning, along with a copy of their agreement, after she ignored his calls to take six-year-old Julian for the night, but he still left without the youngster.

The showdown came a day after a court refused to limit his custody to daytime monitored visits after the 'Baggage Claim' star sought an emergency order because Julian had complained he had been spanked with excessive force by his father.

And when the officers went inside Paula's house to speak with Julian, TMZ reports the youngster told them he was scared of his father and didn't want to go with him.

The deputies told Robin they would not take the child against his will.

However, a source told the website the couple are close to "reaching some middle ground" on dealing with their custody issues.

It was previously claimed Julian had complained to school officials that Robin had spanked him more than once, prompting the staff to report the incident to the Los Angeles County Department of Children and Family Services (DCFS), who opened an investigation.

The 41-year-old actress - who split from Robin in 2015 after 10 years of marriage - began denying the singer access to their son before filing for the emergency order.

And according to legal documents, she told her 39-year-old former spouse: "Julian is scared of you."

The 'Warcraft' actress explained in her declaration that, the day before Julian confided in school staff, he had told her that Robin spanked him "really hard", and when he demonstrated and hit her on the back, it was very painful - but the youngster said he'd been struck even harder.

And a school official also submitted a declaration which stated Julian told her Robin frequently "punches" him very hard, while a nanny claimed the 'Back Together' singer had smoked marijuana on several occasions in front of the little boy.

Paula also accused her ex-husband of showing up to Julian's kindergarten graduation last June drunk at 8.30am and was "hooting and hollering and making inappropriate jokes" in the Catholic church.

However, Robin insisted in his own legal documents that his physical punishments to his son are "consistent with the law" and previously agreed with Paula.

He stated: "On a very rare occasion and only as a last resort, I will use light spanking, but it is consistent with the law -- open hand on the butt. This is the type of discipline to which Paula and I agreed during our marriage."

He also claims the dispute has arisen after he stopped Paula from attending his father Alan Thicke's funeral last month.

He said in documents: "Paula did not have a positive relationship with my father and often made negative comments to me about my father. As such, she was not welcome at his funeral."