More expat spouses forced to leave country after divorce, some even have to leave their children behind 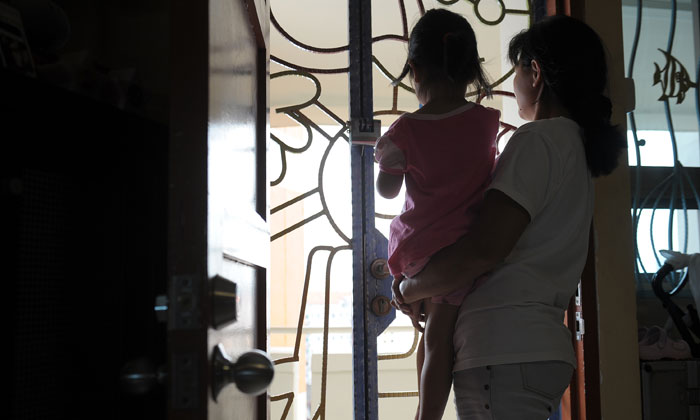 Ending a marriage is never easy, especially in a foreign country, and this is the case for a growing group of expatriate spouses here.

While dealing with divorce, some find themselves stripped of their Dependant's Pass (DP) and are forced to leave the country or fight a lengthy legal battle. They can even be forced to leave behind young children.

Under the law, a parent cannot leave Singapore with his or her children without the consent of the other parent, even if they are legally divorced. Those who do so can be hauled back to Singapore on charges of child abduction.

Once the DP is cancelled, he or she is given a social visit pass or tourist visa to stay in Singapore, which could be 30 to 90 days. He or she is not allowed to work during this period.

This method of "getting rid" of expat spouses is becoming more common, according to lawyers.

When an expat moves here, his or her company sponsors the Employment Pass (EP). The employer of the expat, who is typically male, then sponsors his wife and children as dependants on his pass, which he can ask to cancel any time.

Ms Catherine Rose Yates, a British permanent resident who set up a support group for expats going through a divorce, said she has come across 11 such cases.

"The spouse with the EP is legally entitled to request to cancel the DPs of his family members and, in these cases, by cancelling only the mother's DP, he is trying to separate her from the child," she said.

"He is hoping that she would have to leave the country. That puts him in a better position in a custody battle for the children."

Ms Christina Karl, managing director of Berry Appleman & Leiden Asia Pacific, an immigration consultancy firm, said: "Cancellation is immediate once the employer makes the request. It is not the individual who cancels the DP, but his or her employer as it is the sponsor."

Ms Yates said the support group has grown from five to six members in December 2014 to more than 250 now.

"Almost every day, there is a new post on the group's Facebook page asking for advice about these visa situations. It works both ways, but it tends to be the women who are more vulnerable," she added.

Kate (not her real name), a 26-year-old from Kazakhstan, was told via letters from her husband's lawyers earlier this month that her DP had been cancelled and she could stay in Singapore only on a social visit pass until Oct 5. She was also told she had been taken off the tenancy agreement of their rented condominiumunit and had to leave within the same time period.

Her French husband, a tennis coach who holds an EP, had filed for divorce just a day before, after moving out of their place in July.

She is still staying there with their son, who is nearly two years old. She lost her monthly pay of $1,800 as a spa receptionist last month when her contract ended and is not able to work now.

"If I take my baby home with me, I am denying him access to his father, but why is it also not seen the other way round?" she asked. She has since managed to engage pro bono lawyers to try to get her DP back until the divorce is finalised.

Lawyers said that, in these cases, the working spouse has not done anything illegal. Ms Aishah Winter, associate director at Consilium Law Corp, said: "While probably not desirable, the husband may be within his legal rights in cancelling the DP for the partner and retaining it for his child. The visa status of children is usually pegged to the husband's (or working parent's) employment status in Singapore and will not usually have to change upon a divorce."

Ms Poonam Mirchandani, partner at Mirchandani & Partners, which specialises in international family law, said current rules and regulations allow the spouse holding the EP to, in a way, "play God".

She has seen a 25 per cent rise in the number of expats filing for divorce here in the last two years.

"If there is an ongoing court case, and the children are in Singapore, my firm has seen instances where ICA has given the spouse a long-term visit pass," she said, referring to the Immigration and Checkpoints Authority.

She added: "A trailing wife, whose marriage has broken down and whose husband behaves unconscionably, will find herself in a desperate position.

"Not only is her continued stay here dependent on the whims of her husband supporting her DP application, but he could also cut her off financially and deprive her of access to their home and children. As a foreigner, she is also not entitled to any legal aid."

Mrs Franca Ciambella, managing director of Consilium Law Corp, said her firm has seen a 20 per cent increase in the number of expat inquiries for divorce and separation this year. Many face complications in their visa situations.

Her firm tries to work with both parties or the opposing party's lawyer to maintain the wife's visa status in the interim.

"If that is not possible, (we ask) for a more reasonable timeline in the wife's ability to stay... All of this is dependent on the clients themselves and their willingness not to allow their emotions to affect their decisions, which could cause disruption in the lives of their children."

Ms Wong Kai Yun, co-managing partner of Chia Wong LLP, has seen spouses whose DPs were cancelled, give up and leave Singapore. Such a situation is what the husband is usually counting on.

Lawyer Gloria James-Civetta said that about half of the spouses in expat divorce cases she saw last year threatened to cancel the DP.

"After receiving my letter, they usually take steps to reinstate the DP at least until the divorce is finalised and, in some cases, until the partner can get a relevant pass to work here," she added. "Usually, the stubborn ones will go to court."

A spokesman for the Ministry of Manpower said that a person may also apply for a work pass on his or her own merit, adding: "Approval will be subject to the relevant eligibility criteria being met."

Ms Mirchandani feels that the courts should more readily allow trailing spouses to relocate with their children, if they can show that they have no means of staying here.

Ms Yates said: "It could be easier if there was some sort of visa to allow the women caught in such situations to get back on their feet.

"They would like to work and not be completely dependent on their ex-husbands, but they need some support to get the right passes so they can be with their children."

Staying in Singapore on visit pass

For nearly every month since January last year, Alicia (not her real name) has been heading to Malaysia by plane or bus, and returning shortly after.

All for the sake of her five-year-old daughter.

Following her divorce in 2014, her Dependant's Pass (DP) expired in January last year, and she has been on a visit pass, which has to be renewed for her to stay in Singapore.

"ICA (Immigration and Checkpoints Authority) gives me eight to 30 days of extension, if any, depending on the reasons I have, like a date for a court case," said the 35-year-old, whose daughter is on a DP here and attends pre-school.

The court had awarded joint custody of the girl to both parents, and care and control to Alicia, which means she is responsible for the girl's daily care.

But being on a visit pass means she cannot work and has trouble renting a home.

She stayed at a friend's place for a year for free, before moving in May to a room in another friend's home in Bukit Batok with her daughter, paying $800 a month in rent.

Her applications to change her daughter's DP to a Student's Pass - for foreigners studying here - had been rejected three times.

If her daughter had a Student's Pass, Alicia could apply for a Long-Term Visit Pass to accompany her as a guardian.

"I have my daughter here and I have the care and control, but it's clearly not enough for me to extend the visa to a long-term one," she said.

Alicia, who declined to reveal her nationality for privacy reasons, alleged that her former husband - an American who is a banker on an Employment Pass - had started cheating on her in 2011. He now sees their daughter nine days a month and pays $2,000 monthly for child support. "It's so difficult to plan anything because I don't know when I will be kicked out of the country," said Alicia. She found a lawyer in May - who charges her a small fee of $300 a month - to help with legal proceedings.

"I'm still looking for a job offer but it's very difficult, especially when companies are employing only locals or permanent residents.

"I'm scared I'll lose my daughter - she's my everything. I would be glad to go back to my home country and start life all over again, but I also don't want to separate her from her father.