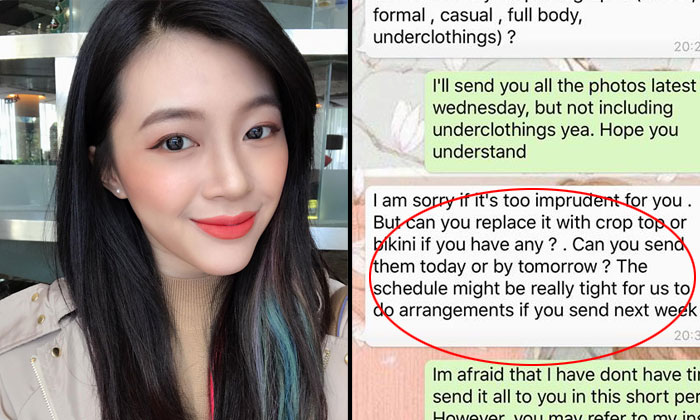 A young Malaysian girl, Chanah EeChing, recently avoided being scammed by a pervert who used a fake email account claming that he was from the events management team from Suria KLCC Sdn Bhd (a popular mall in Kuala Lumpur).

According to a report by The Coverage, he was using his fake identity to trick young women into sending over pictures of themselves in their undergarments to be hired as an ambassador for the mall.

EeChing, the almost victim of the scam, took to Facebook to share her experience as well as to warn all young ladies out there.

She was chosen to be the ambassador for Suria KLCC Sdn Bhd's fourth mall by the "events management department" after they came across her social media following.

EeChing was then requested to send images of herself in her underwear for her "profile" and for "designers to match their clothing" -- all this to be paid as much as $13,000 a month.

They even personally WhatsApp-ed her to request for her photographs to be sent in quick, and asked if she could send pictures of her in a crop top or bikini, when she declined to send images of herself in her underwear.

Thankfully, EeChing escaped from being scammed after she immediately called up the Suria KLCC HR Department to find out about the person who approached her.

Dear ladies, if you get an email/text messages that is similar to these, please hit delete and tell your friends and relatives to do the same.