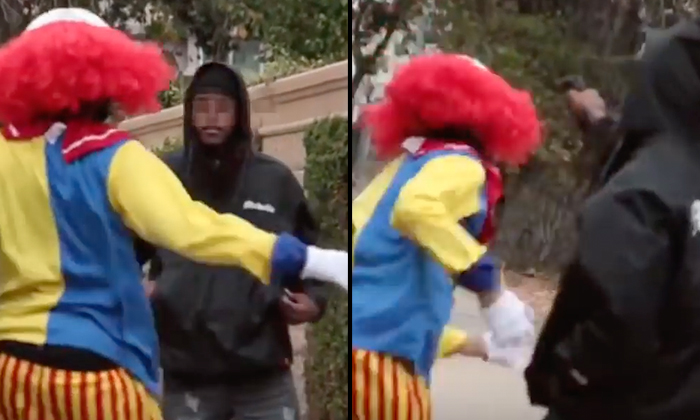 Killer clowns are on the loose, with sightings of them everywhere, from schools to forests, but to most it is no laughing matter.

A YouTube prankster called Sadiq Mohammad, 20 dressed up as a clown in a bid to scare people, but met his match with this guy.

On the short video posted on his YouTube channel, he succeeds in scaring a good amount of people, but the tables are turned on Sadiq when a guy pulls out a handgun.

Sadiq approaches the guy but bolts from the scene when the man pulls out the gun manages to hit Sadiq on the head before he runs away.

Sadiq falls to the ground, shouting: "It's a prank! There's a camera right there!".

The man points the gun in Sadiq's direction as he bolts.

The clip has since gone viral and Sadiq told KCRA: "Lesson learned is, people don’t play with the clown stuff. Like, people really will shoot anybody."

Related Stories
No clowning around: Guys chased by clown with knife while running in the woods
This guy dressed as a creepy clown to scare his naked girlfriend
GrabCar driver accepts trip from cemetery -- only to realise it is a prank when he reaches location
clown
killer clown
Halloween
funny
prank