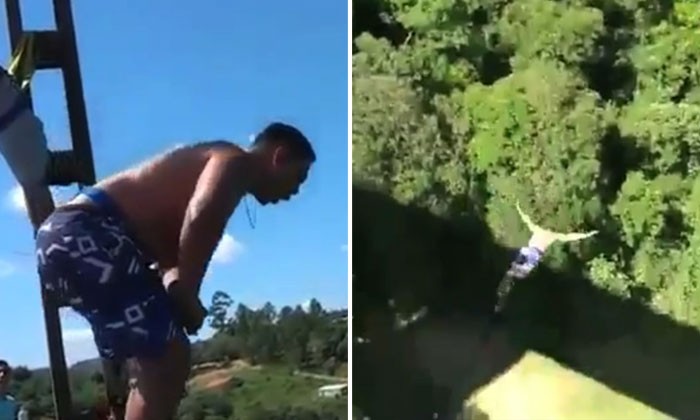 A man's bungee jump attempt goes horribly wrong when the cord that was supposed to be his only life line was too long, causing him to hit the ground head-first and die.

A video shows thrill-seeker Fabio Ezequiel de Moraes standing at the edge of the abyss in Sao Paolo, Brazil, and giving a whoop as he takes the leap into the valley below.

But the video cuts off just as he hits the floor, missing the inflatable mattress on the ground, reported UK publication The Metro.

The drop was about 40 metres.

What was more horrifying is that his wife, six-year-old son and brother had reportedly witnessed the whole incident right before their very eyes.

Moraes' son was apparently supposed to bungee jump with him but had pulled out at the last minute.

The 36-year-old was taken to hospital but later died of head trauma, reported The Mirror.

Various UK publications reported that the adventure company had miscalculated the length of cord needed for the jump.

Police have seized the equipment used for the fatal fall and are investigating the accident.

The owner of the bungee jump attraction was charged with professional negligence.

While the woman suffered severe head and neck injuries, lucky for her, she survived the fall.

Related Stories
'Only her legs were left': Woman falls into vat of molten chocolate at sweet factory in Russia and gets minced to death
Teen dies after getting struck by samurai sword outside KL pub -- trying to protect friend
Bungee jump
Brazil
horrific
accident
scary
death