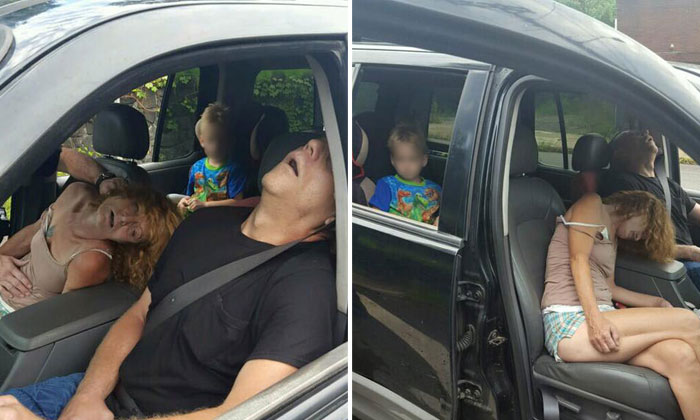 Police in Ohio, United States posted photos of a man and a woman passed out in a car with a 4-year-old boy in the backseat.

The couple were suspected to be on heroin.

The city of East Liverpool, Ohio, shared the photos on its Facebook page.

It shared that it felt it was necessary to show "the other side of this horrible drug".

"We feel we need to be a voice for the children caught up in this horrible mess.

"This child can't speak for himself but we are hopeful his story can convince another user to think twice about injecting this poison while having a child in their custody."

According to the police report posted with the photos, an officer approached the car after seeing it weaving erratically back and forth before drifting to a stop on the road.

The couple was found unconscious and both were revived by emergency medical technicians.

The officer said that a folded up piece of paper found between the woman's legs contained a small amount of a pink, powdery substance.

The man, who was the driver, was arrested on suspicion of endangering a child and a traffic offence.

The woman was taken into police custody on child endangerment and public intoxication charges.

The boy has since been taken into the custody of county child protection agents.

Related Stories
Woman got addicted to heroin after taking it to challenge ex-BF to quit
Singaporean, 33, arrested in Bali for drug possession
'Accident' at Bukit Batok West turns out to be drug bust by CNB
More About:
child
inappropriate
drug
drugs
parent
parents