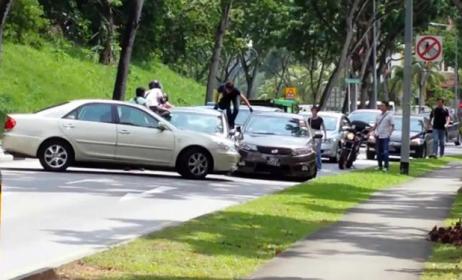 What looked like an accident scene at Bukit Batok West on July 2 turned out to be a drug bust by the Central Narcotics Bureau.

The clip, which was posted by channel on YouTube, shows the drivers of two cars yelling instructions to the driver of the car stuck in the middle.

Soon after, a driver of a fourth car and a biker are seen running to scene. A fifth driver then joins the scene. The men started to climb onto the cars to try and pull the driver seated in the car trapped in the middle.

A sixth driver then arrives and stops his car in front of traffic. He comes out of his vehicle to render assistance as well.

According to the CNB spokesperson, the drug trafficker had crashed through a public gantry in his attempt to escape, and the clip apparently shows what happened

Here is the CNB statement which sheds light on the incident:

"“On 2 Jul 2014 at around 1pm, CNB conducted an operation against a 26-year-old drug trafficker in Bukit Batok.

"When CNB officers move in to arrest him, he had attempted to evade arrest by crashing his car through a public carpark's gantry.

"About 200g of Ice was seized from the male Singaporean's car.

"CNB officer conducted follow-up raid at his hideout in a condominium in the Bukit Batok vicinity and recovered another 488 ecstasy tablets, about 160g of Ketamine, 56 Erimin 5 tablets, small amount of Ice and drug paraphernalia.

"Investigations into the drug trafficking offences are ongoing."