Hilarious memes and tweets: Twitter is losing it over heartbreaking penguin cheating drama in viral video 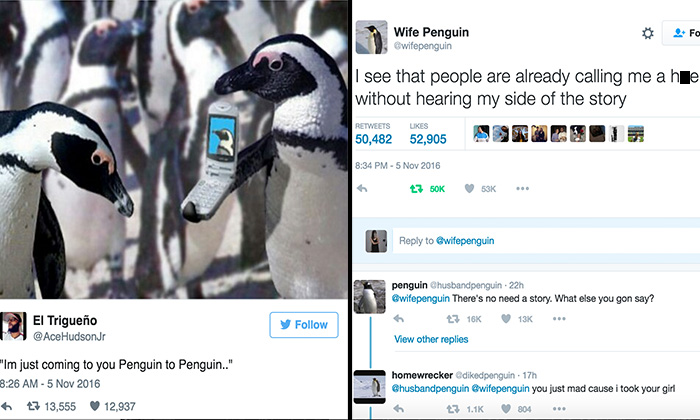 The Twitter world was shaken after a dramatic video of a bloody battle between two male penguins over a cheating partner went viral yesterday (Nov 5).

On Friday (Nov 4), National Geographic had tweeted out a scandalous clip of a penguin cheating drama, and the video has since garnered over 200,000 retweets.

While some felt that whole cheating drama was heartbreaking, and took to Twitter to share their distraught feelings, others jumped at the opportunity to create hilarious tweets and memes.

You can take a look at some of these entertaining tweets and memes in the gallery above.

"I can relate. I had my first relationship on the game Club Penguin.

"Once, I walked in on my girlfriend cheating on me in my (virtual) igloo home."

If you thought the drama and savagery were too much to handle, some have even created Twitter parody accounts for the husband penguin, home wrecker penguin, cheating wife penguin, and baby son penguin.

"I see that people are already calling me a h*e without hearing my side of the story," tweeted user 'wifepenguin'.

The user 'husbandpenguin' then replied, "There's no need a story. What else you gonna say?"

On Nov 5, during his Suburbia Tour in Colombia, Ohio, singer Troye Sivan dedicated his song, 'The Quiet', to the heartbroken husband penguin.

"It like broke my heart. This penguin drama has been on my mind all day, and so I'd like to dedicate this song to the dude penguin. This is the song called 'The Quiet'.

If there is one thing you can take away from this penguin drama, it would be: Never cheat on a penguin, and of course, never cheat on your partner.

Related Stories
Bloody battle ensues after penguin comes home to find wife with someone else
28-year-old man's body found after suspected crocodile attack in Sabah
'Big cat' resting under house in Malaysia lets out deafening roar, turns out to be a leopard
unfaithful penguin
penguins fight