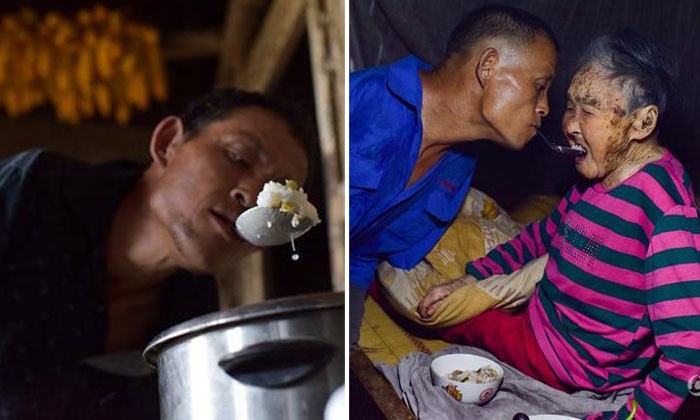 A 48-year-old farmer, Chen Xingyin, from Chongqing, China lost his arms in an electrical accident when he was just seven years old but never stopped fending for himself and taking care of his mother.

Chen, the youngest son from a six-member family, farms, cooks, feeds his family's goats and since 2014, he has been taking care of his 88-year-old, bed-ridden mother who began suffering from bronchitis five years ago.

He cooks her three meals a day and feeds her.

He raises more than 20 goats and herds animals to graze every afternoon at 3pm.

According to Shanghaiist, he became a local celebrity with numerous parents in Tongxin village, where he resides because of his self-reliance and filial devotion which sets him as an ideal role model for their own children.

A fellow villager said, "Even though he doesn't have any arms, he still works faster than most people.'

Chen learned how to wash, cut and cook food using his feet over the years and now no task seems impossible to him.

A web user commented on his inspiring story, "In some ways, his feet look more useful than my hands.

"What I respect about him the most is how hard he works to make his own life better instead of relying on help from others."

"People like him deserve more attention and should serve as our example. I wish him happiness," added another netizen.