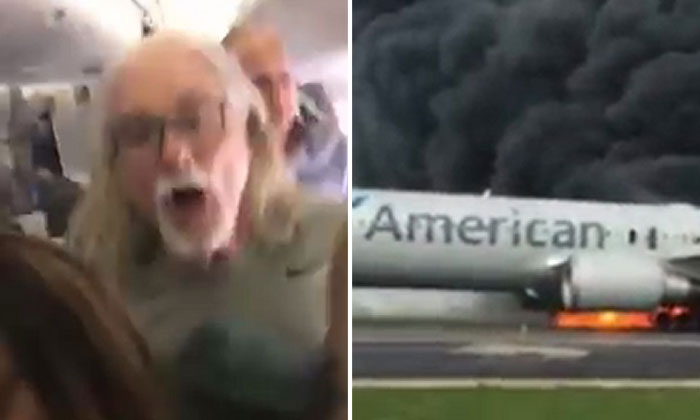 Stomper Jeffrey received a chilling video from his friends of terrified passengers rushing to escape the burning plane.

In the video, many of them are screaming and shouting for those in front to go faster.

At the emergency exit, they jump onto an inflatable slide and run as fast as they can away from the plane.

Plumes of black smoke and blazing flames can be seen emitting from the American Airlines plane.

According to Reuters, the engine failure flung broken turbine parts as far as half a mile from the scene.

Such engine failures are extremely rare and investigators are searching for clues as to what had caused it.

American Airlines Flight 383, a twin-engine Boeing 767 was bound for Miami with 9 crew and 161 passengers aboard.

The engine on the right-side of the plane failed and leaking jet fuel caught fire under the wing.

One flight attendant and 19 passengers suffered minor injuries in their escape.

"We're taking care of our passengers and crew on flight 383 at @fly2ohare."