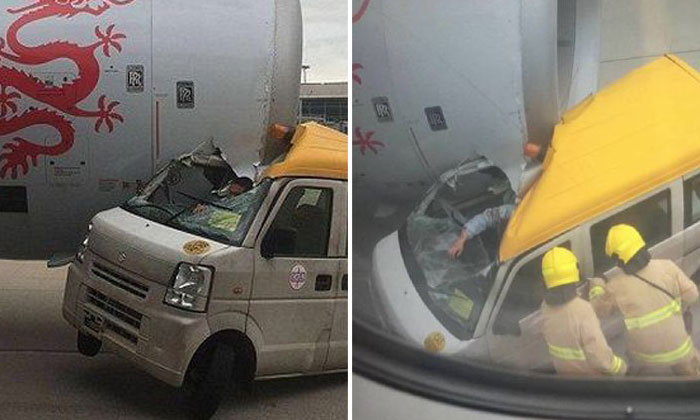 The driver of a van sustained head injuries after his vehicle crashed into a Dragonair plane at the Hong Kong International Airport on Thursday (Sept 8) afternoon.

The rare accident occurred at about 4pm in the afternoon as flight KA691 was departing for Penang.

The Airbus A330 was heading slowly for the runway when the van drove under the plane and straight into one of its engines, reports said.

The service van from China Aircraft Services was stuck under the plane's engine, Apple Daily reported.

The driver, a man, suffered injuries in the head and shoulder. He was conscious when rescued from the vehicle and taken to North Lantau Hospital, police told the South China Morning Post.

In video footage of the crash, the van appeared to zoom straight at the plane, which was inching out from the apron where it was parked.

The vehicle made a sharp turn to the right before crashing into the aircraft.

Five fire engines and two ambulances were called to the scene.

Passengers were asked to disembark and the flight finally departed at 7.44pm according to Hong Kong International Airport's website.

Other flight departures were not seriously affected, reports said.

Related Stories
SQ plane turns back to Changi Airport after leaking oil, then bursts into flames while landing
This is what might happen to your luggage if you check them in at the airport
More About:
airline
plane
accident