16-year-old pregnant girl wakes up in coffin, alive...only to die in hospital 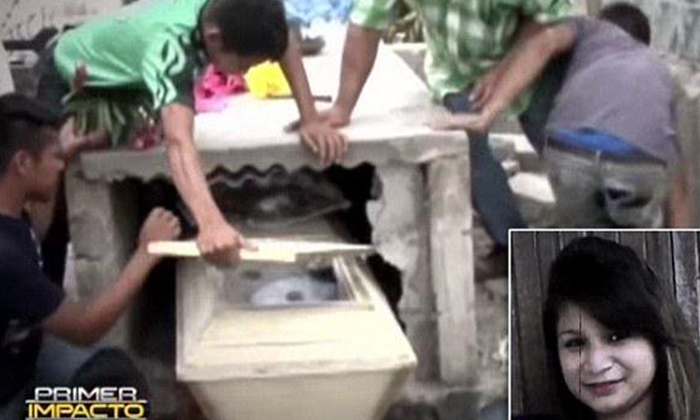 16-year-old Neysi Perez was three months pregnant when she collapsed after having a panic attack outside her home in La Entrada, western Honduras.

She started foaming at the mouth and relatives thought she was possessed and had her exorcised. She was later sent to hospital but was pronounced dead three hours later.

A day after her funeral, her husband Rudy Gonzales visited her grave and heard bangs and muffled screams from inside the concrete tomb.

A cemetary worker named Jesus Villanueva heard screams coming from her grave and said: 'I convinced myself that the screams were coming from somewhere else. I never imagined that there was someone alive in there.

According to AOL, family members smashed the concrete tomb and took the coffin to the nearest hospital. Relatives also said that the tips of Perez's fingers were bruised and that the viewing window on her coffin had been smashed.

However, she was pronounced dead at the hospital.

Doctors said that Perez's heart could have temporarily stopped due to the panic attack or a cataplexy attack, which made her lose voluntary muscle function temporarily.

They also believe that the girl may have then died from lack of oxygen after waking up inside the coffin.

Related Stories
Rest in peach: Apple gives the peach emoji a makeover and people are in mourning
Woman takes revenge on her cheating boyfriend who wants his money back
Women all over Asia are balancing objects on their chests -- thanks to an anime character
bizarre
pregnant
pregnant teen
weird
funny
death