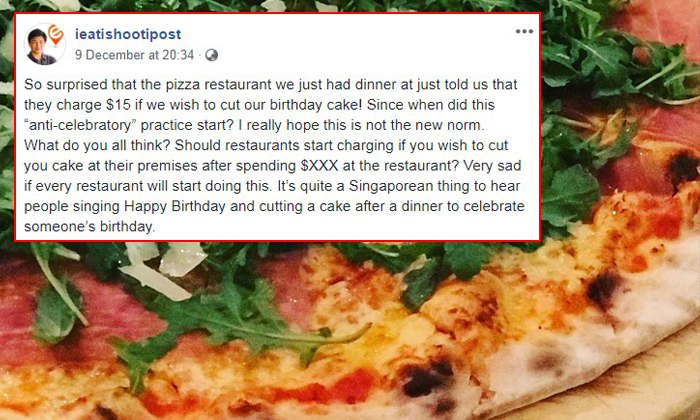 We have all heard of a corkage fee understandably imposed by some restaurants, where you bring your own wine and pay for it to be opened and served to you.

But what about a 'cakeage fee'?

Food blogger and owner of ieatishootipost Dr Leslie Tay shared how a pizza restaurant that he visited for dinner had wanted to charge $15 to cut a birthday cake on its premises.

In a Facebook post on Dec 9, Dr Tay said he hoped that this "anti-celebratory" practice would not become the new norm in Singapore.

He wrote: "I was a guest at the celebration, so I only found out about the $15 charge when it was time to cut the cake. My hosts did not ask at the time of the reservation because we did cut a birthday cake there earlier in the year. They were informed when they handed the cake to the restaurant. Apparently, they started to imposed it in Sep.

"In the end, we took the cake home to cut, because the birthday girl just did not feel it’s worth $15 to cut a 600g cake. It did burst the bubble on an otherwise joyous occasion."

According to Channel NewsAsia, the food establishment in question was the Peperoni Pizzeria restaurant at Frankel Avenue in Katong.

Parent company of the Peperoni Pizzeria chain, Les Amis Group, confirmed the 'cakeage' fee and said it was rolled out at all Peperoni outlets in September.

Some found the extra fee "ridiculous" and unacceptable".

Others felt that the cakeage fee was justified.

What do you think about cakeage fees and would you pay?

Related Stories
Trio have $1,755 meal at Michelin-starred restaurant, including $20 each for mineral water
Bugis restaurant 'withdraws' apology to customer who left bad review after $120 meal
Stall owner responds to incident of woman getting chicken drumstick instead of duck drumstick
More About:
food
blogger
restaurant
facebook