Fire breaks out at open grass patch in Jurong: 'So smoky, thought it was haze' 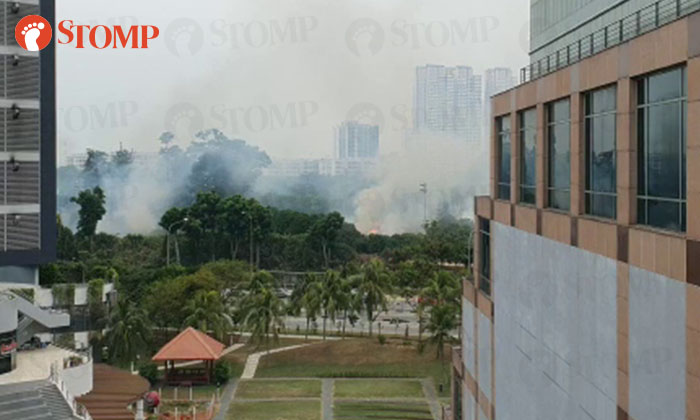 A fire broke out at an open grass patch along Ayer Rajah Expressway (AYE) near Jurong Town Hall Road, at about 5pm on Friday (Sep 20).

Stompers Mitsu, K, Grace and David shared photos and videos of the fire.

K told Stomp: "The smoke was very big and the smell of smoke in Jurong was so strong."

Stomper Mitsu said: "I work at a building nearby and it smells bad here.

"Initially, I thought it was due to the haze but when I looked out a window, I noticed a fire.

"I was in the office but I could still smell it."

Responding to a Stomp query, the Singapore Civil Defence Force (SCDF) said: "SCDF was alerted to a fire at an open grass patch along AYE, near Jurong Town Hall Road at about 5pm on Friday (Sep 20).

"The fire was extinguished by SCDF using water jets.

"No one was injured as a result of the fire. The cause of the fire is under investigation."

Related Stories
Smoke emits from Volvo as it catches fire in Balestier
Prime mover bursts into flames on CTE
Resident taken to hospital after PMD causes fire to break out in Rivervale Drive flat
More About:
fire
Jurong
scdf