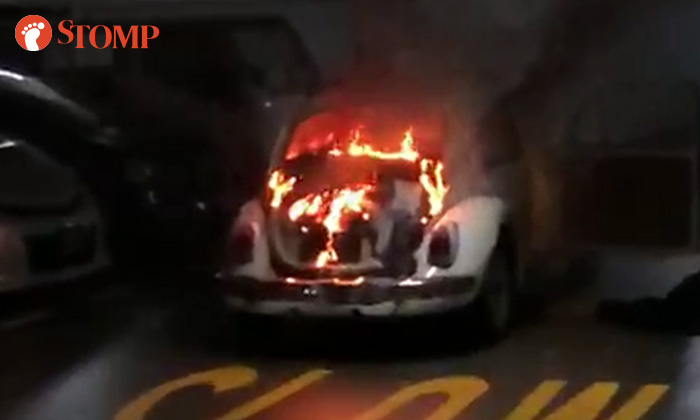 A car's engine compartment caught fire in a multi-storey carpark at Block 124D Rivervale Drive at about 10.55pm on Wednesday (Sep 11).

Stomper Jocelyn was waiting for her friends at a void deck nearby and got to know about the fire when one of them arrived.

She contributed photos and a video of the incident.

She told Stomp: "My friend arrived close to 11pm and told me that a car was on fire in the multi-storey carpark.

"We rushed towards the carpark to see whether anybody was injured.

"We saw the owner when the firefighters arrived and he told us that the car's engine suddenly caught fire when he was finding a parking lot."

In response to a Stomp query, the Singapore Civil Defence Force (SCDF) said: "At about 10.55pm on Wednesday (Sep 11), SCDF responded to a vehicle fire at the second story of a multi-storey carpark located at Block 124D Rivervale Drive.

"The fire involved the engine compartment of a car and was extinguished by SCDF using one water jet.

Stomp understands that three other vehicles parked beside the car were also affected by the fire.