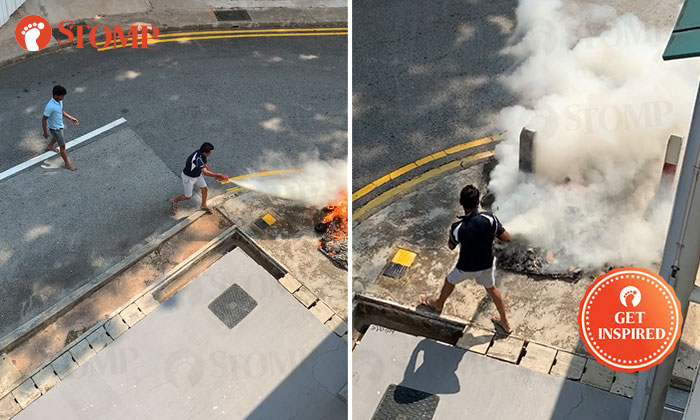 A group of constructions workers sprung into action after a recycling bin caught fire near Block 8 Jalan Rumah Tinggi on Sunday afternoon (Sep 8).

Stomper Yuniza alerted Stomp to the incident and shared photos she took from her home.

"The recycling bin was on fire, I'm unsure how, and it was burning heavily with small parts exploding everywhere," she said.

"The workers, who were in the container quarters, heard the popping sounds from the fire.

"When they saw it, they rushed and helped to put it out immediately with fire extinguishers and water they retrieved from their quarters.

"Their quick thinking and ability to put it out helped to extinguish the fire."

In response to a Stomp query, the Singapore Civil Defence Force said they responded to the fire at about 3.25pm.

It was extinguished by the SCDF using a water jet, a spokesman said.

Yuniza was extremely grateful to the workers for their civic-mindedness:

"I just want to commend and bring attention to their actions for stepping up even on their off day and for continuing to help build Singapore in more ways than they already have.

"I hope people continue to look at our foreign workers who helped to build Singapore in a positive light as they have helped us more than we know."

Related Stories
Construction workers lauded for going out of the way to clean girl's spilled coffee on train
PMD catches fire while in use at Sengkang HDB block
Man rescued from office unit after fire breaks out at Golden Mile Complex
More About:
fire
worker
workers
kudos
inspiring
hero