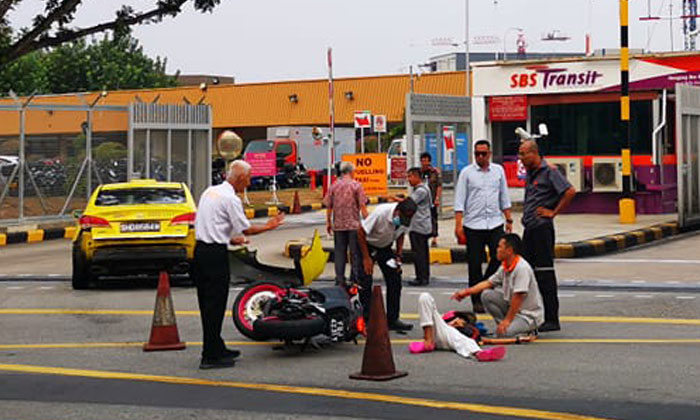 A 20-year-old female motorcyclist was taken to hospital after she was involved in an accident with a taxi outside Hougang Bus Depot on Thursday afternoon (Sep 19).

Stomper Ah Boy alerted Stomp to a photo taken at the scene that was posted on the Singapore Taxi Driver Facebook group page.

In the photo, the woman is seen lying on the ground.

Traffic cones are placed around her and her bike while a group of men are seen coming to her aid.

The back bumper of a nearby yellow taxi is seen lying on the road as well.

In response to a Stomp query, the police said they were alerted to the accident along Defu Avenue 1 at about 5pm.

The motorcyclist, a 20-year-old woman was conscious when taken to Sengkang General Hospital, a police spokesman said.