FB post about GrabFood rider 'fined $300 for wearing cloth as mask' is fake, he was asking police for help over theft 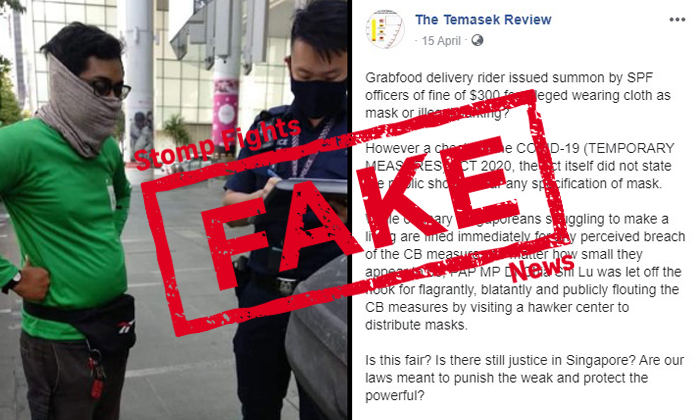 The police have clarified that a Facebook post claiming that a GrabFood deliveryman was purportedly fined $300 for 'wearing a cloth as a face mask' or 'illegal parking' is false.

The GrabFood deliveryman had in fact approached the police for assistance after thinking that items had been stolen from his motorcycle, said the Singapore Police Force on Friday (Apr 17).

The police said: "In a Facebook post on April 15, The Temasek Review (TTR) showed a picture of a GrabFood deliveryman and a police officer, and suggested that the man was ‘issued summon by SPF officers of fine of $300 for alleged wearing cloth as mask or illegal parking'."

The police also said that it was "irresponsible of TTR to assume that the police officer was taking enforcement action against the deliveryman, simply based on the picture."

They added: "What actually happened was that the GrabFood deliveryman had approached the police officer for assistance, thinking that items were stolen from his motorcycle, and the officer was taking a statement from him.

"Such allegations are highly irresponsible and hurt public confidence and trust in the police.

"It also undermines our officers, who are at the frontlines trying to keep Singaporeans safe and secure during this challenging period.

"We ought to stand united, instead of sowing division and discord."