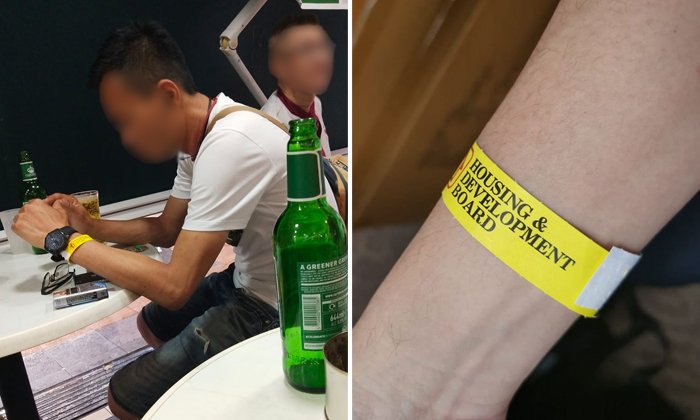 A man seen wearing a wristband bearing the Housing & Development Board (HDB) logo in public was accused was flouting his Stay-Home Notice (SHN) — but this is untrue.

A photo of the man at a coffee shop has been circulating on social media with the caption: "Shouldn't this fellow be on SHN? How come can come out to drink beer?"

On WhatsApp, the message was accompanied by an audio clip that said: "I was drinking with my friend at Toa Payoh Central. [The man] was sitting beside me.

According to the audio clip, the man said no and left.

Li said he had visited HDB Hub to do paperwork and collect his keys on Friday (Mar 27). During the waiting time, he went for a drink at the coffee shop opposite.

While at the coffee shop, Li's wristband caught the attention of two uncles and they started taking photos of him.

Li's brother, 40, told Wanbao: "The two uncles were behaving sneakily and even asked my brother if he was on SHN.

"My brother explained that the wristband was from HDB and had nothing to do with quarantine orders. Having finished his drink, he left the coffee shop."

However, the uncles did not pay heed to Li's explanation and posted his photo online with a misleading caption instead.

Netizens, without verifying the facts, slammed Li and continued sharing the fake news.

HDB said: "As part of our safety measures for visitors entering the HDB Hub for their housing transactions or enquiries, we issue these wristbands to visitors requiring re-entry to our premises. These visitors would have also passed our temperature checks and declared their travel status earlier.

"For example, visitors will get the wristband, if they need to return to the car park to get documents for their transactions, or to a food outlet for their meals.

"Please do not be alarmed if you see the wristbands. They are not an indicator of someone who has been issued with a Stay-Home Notice, or a Quarantine Order."

According to HDB, the colours of the wristbands are changed daily to prevent visitors from reusing them.

It added: "At the same time, we advise our customers to make use of our e-Services on the HDB InfoWEB or contact us via email or our hotlines for their enquiries to reduce their time spent in public spaces."