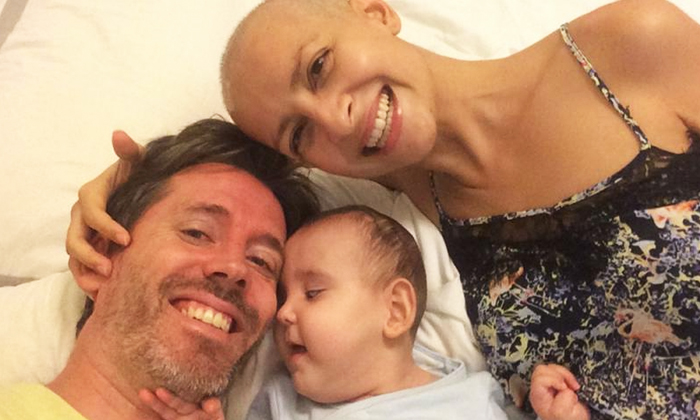 Two years ago, Mr Simon Recordon was in a taxi, following an ambulance that was taking his three-month-old baby daughter Elsa to hospital for a brain operation.

Beside him was his wife Juliet, reading some of her own medical results she had just received, which revealed that she had late-stage cancer.

"It was a very confusing time. I had both my girls, each having a big problem," said Mr Recordon, 38, a British citizen who moved to Singapore with his wife in 2010.

His wife was told she had only six months to live. His daughter, born very prematurely at 25 weeks, was also given a bleak prognosis as she had meningitis, inflammation of the membranes surrounding the brain and spinal cord.

Today, both mother and daughter are still alive and fighting. Mr Recordon and his wife set up a crowdfunding page on GoFundMe last month, hoping to raise money to cover the medical costs.

He owns a window-cleaning business; his wife co-founded a healthcare technology start-up but has been unable to work and has had little income in the past two years.

Mrs Recordon was diagnosed with early-stage cervical cancer in March 2012 and she went through an operation that would treat the cancer while allowing her to still have children. Doctors gave her the all-clear a few months later.

The couple then learnt in 2014 that she was expecting, and Mr Recordon told The Sunday Times that pre-natal scans and tests showed "everything was going well".

But 23 weeks into her pregnancy, her waters broke and she was rushed to hospital where she later developed an infection. Doctors had to perform an emergency caesarean section. The infection passed on to Elsa, causing the meningitis.

That condition, along with her premature birth, led to other problems. Elsa has only the right side of her brain and cannot see in her right eye, while her left one has limited vision.

She spent five months in intensive care before being discharged from the hospital. Since then, she has had about 10 operations - mainly to insert or remove shunts which drain excess fluid from her brain, or to manage her seizures. The seizures, if left untreated, can cause further brain damage.

Said Mr Recordon: "We see the pain that Elsa goes through, and maybe we're selfish to let her go through all this. But we're put in charge to take care of her, not to give up on her."

Meanwhile, his wife, now 37, had been undergoing various treatments, including chemotherapy, radiotherapy and immunotherapy, which primes the immune system to recognise cancer cells and destroy them. She has also had four operations on her back and abdomen.

"While all of this has been exhausting, Elsa's fighting spirit has been an inspiration to remain strong and optimistic, and to never give up so I can be here for Elsa and Simon," she wrote on the crowdfunding page.

She was unable to be interviewed by The Sunday Times as she was in hospital at the time, being treated for mouth ulcers and a throat infection.

Mr Recordon said: "I don't know how I cope. Maybe I'm numb. But Juliet's positivity has also made it a lot easier for me."

Asked if there were times when he felt forced to choose between caring for his wife and caring for his daughter, he said: "I made a conscious decision to spend more time with Juliet, as her time is more finite. In terms of whose medical costs to cover, with this crowdfunding page, I hope to avoid making that choice."

He said insurance firms have not been willing to cover their treatment costs, which have depleted the couple's savings in the past two years. They hope to raise more than $717,500 with their online appeal, which has so far seen over $300,000 in donations.

Freelance writer Jimmy Yap, 48, donated $90. "For someone who has gone through so much, Juliet is still so full of life and optimism. I wish I could be like that," he said.

While Mr Recordon hopes to raise the required funds, his greater hope is that his family's story will make people reassess their priorities in life.

He said: "Whatever challenges you're going through, put life in perspective. You may say your child is annoying, but, hey, he can walk. Your child may not have entered a good school, but you can interact with him. Don't worry about the little things."

Related Stories
Cyclist gets injured when his bicycle chain snaps -- and these workers come to the rescue
Seen but not noticed: The blind tissue uncle
Stomp interns sent for an assignment -- and they end up crying
cancer
inspiring
health