Seen but not noticed: The blind tissue uncle 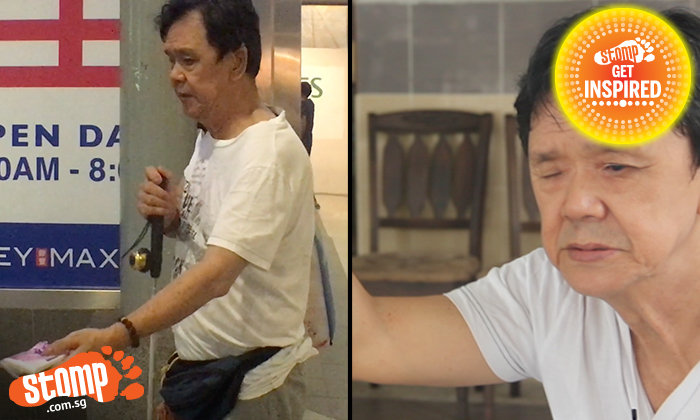 Tissues sellers, they are everywhere.

They stand outside MRT stations and shops, and sometimes they come to your table when you are having dinner at open air eateries or hawker centres, selling tissues packs at three for a dollar.

Stomp spoke to one of them recently.

He is 66-year-old Singaporean Steven Aw. Steven went blind after suffering from a serious eye condition known as glaucoma. Although his eyes were operated on three times, doctors could not save them.

He has been blind for 13 years.

He worked as a storeman for SBS for 30 years, but his employment was terminated as he could no longer perform his duties.

With a wife and a daughter to support, Steven trained as a foot massage therapist at the Singapore Association for the Visually Handicapped (SAVH).

He then found employment at a massage shop for a year but found it a struggle to make ends meet as competition was stiff.

Now, he freelances as a massage therapist and to supplement his income, he sells tissue paper outside an MRT station in the east side of Singapore.

It is illegal to sell tissues without a permit and he has been given warnings by the National Environment Agency (NEA). Yet, he continues to sell them as he feels he has no choice.

Although you might think his family is able to support him, the sad truth is that they are not Singapore citizens.

His wife is from Batam and and his daughter was born in Indonesia as well.

They have applied countless times for Singapore permanent residence and citizenship but have not been successful.

His daughter, now 25, has been unemployed since graduating from a polytechnic as employers are reluctant to hire her.

On a happier note, Steven says that on some days, he makes good money doing foot massages outside a shop near his home.

He has a few regular customers and sometimes, there are people who recommend his services through word of mouth.

He admits that life is quite bleak as he can no longer enjoy the luxuries of shopping and travelling.

But he is more than happy when his friends visit him to chit-chat.

His wish is for his daughter to find employment and for the public to be more tolerant as well as aware of the needs of the visually-impaired.