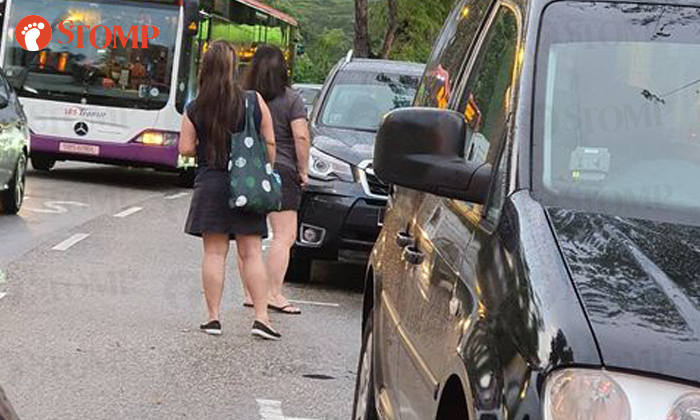 A family reserved a public parking lot at Changi Village and prevented others from accessing it — by standing in it and using themselves as human barricades.

Stomper Koh said the incident occurred on Saturday (Jan 23), at around 7.19pm.

She submitted several photos of the incident, including a picture that shows two women standing in an empty parking lot.

Loh recounted: "I was at Changi Village and was trying to park in a public parallel parking lot when this family remained standing in the lot, saying that the lot was reserved.

"When we tried to reverse into the lot, one of the women stood right at the boot of our car in order to physically 'block' us from entering the lot.

"It was then that my partner got out of the car to tell them politely that they aren't supposed to reserve public lots like that.

"However, they responded by saying 'we've waited very long for a lot.'"

It is unclear how long exactly the family had been waiting.

The Stomper added: "At this time, another man came up to tell us that he was leaving his lot. Hence, we eventually took the lot of said man.

"After we parked, this family was still standing in the empty lot that they were reserving.

"As we got out of our car, we saw the family's black Hyundai entering the lot that they were reserving. They then left as quickly as they could.

"As we were walking to Changi Village Hawker Centre, the family kept looking across the road at us and over their shoulders (being wary of us I assume?).

"There was no physical alternation nor any screaming/arguing episode but we just didn't think that this is right.

"Furthermore, they had a young son who was probably of primary school age with them and watching the situation, and their behaviour is not setting a good example for him.

"Please correct me if I am wrong, but are we allowed to reserve public carpark lots like this?

"I feel that it's not fair nor right to 'book' public lots like this. If their family car had been waiting along the roadside for a lot, I totally get it.

"However, in this situation, I believe no one has the right to physically stand in the public lot and claim it as 'reserved.'"

Have you encountered similar situations before? Let us know in the comments.

Related Stories
P-bollards installed at Tampines block after woman seen parking Audi at void deck
Guy stands in Pepys Road lot to 'chope' it for friend even though another driver is waiting
Woman chopes parking lot by standing in it, refuses to budge even when honked at
More About:
parking
inconsiderate