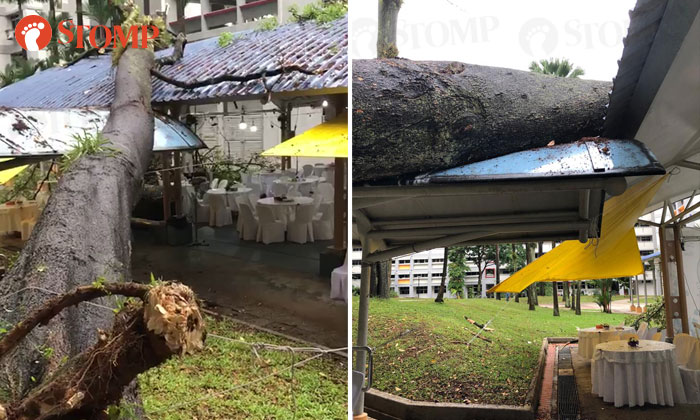 A tree at Choa Chu Kang North 5 fell onto a multi-purpose hall where a funeral wake was being held on Tuesday afternoon (Apr 23).

Stomper Bernie, who was attending the wake at Block 762A, alerted Stomp to the incident and shared photos and a video taken at the scene.

According to the Stomper, the tree fell at about 5pm after a heavy downpour earlier in the afternoon.

"We were seated in the hall and just chatting when we heard a loud thud above us.

"We heard the sound of something hitting metal. 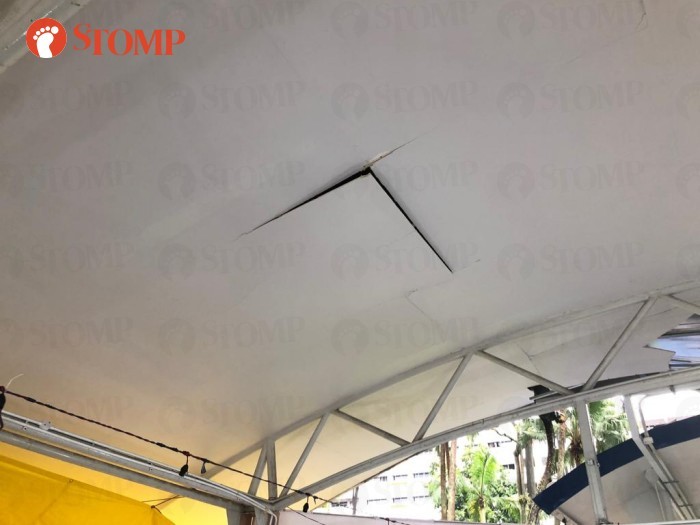 "When we walked out to check, we saw this very big, old tree had fallen on top of the multi-purpose hall.

"It was surprising because at the time of the incident, the rain had eased and it was not particularly windy."

He added that to his knowledge, no one was injured.

"When the tree fell, the family was sitting inside the hall," he said.

"Very lucky nobody was hurt."

The National Environment Agency (NEA) had earlier that day issued a heavy rain warning with "moderate to heavy thundery showers with gusty wind" expected over southern, western and central areas of Singapore between 1.45pm and 3pm.

At about 4pm, the agency posted that there was light to moderate rain clearing in the late afternoon.

Stomper Bernie believes trees, especially older ones, should be checked regularly to prevent incidents like this from happening: "I think we shouldn't wait for things to happen before checking trees for fall risk.

"If this tree had fallen on someone, it would have been no joke."

In response to a Stomp media query, a Marsiling-Yew Tee Town Council spokesman issued the following statement regarding the fallen tree:

"Our Town Council was notified of the fallen tree on 23 April, at around 5.30pm.

"We deployed the contractor immediately and the fallen trunk was removed by 8.30pm.

"We apologise for the inconvenience caused to the family that was holding the funeral wake at the time of incident.

"Fortunately, no one was injured.

"Findings from the arborist showed that the 18-metre-tall tree gave way at the base as the roots were not grown deeply.

"The strong wind and rain also contributed to the toppling.

"Town Council have been conducting regular inspection of the trees’ health and crown reduction of the mature trees to lower the risk of such occurrence."