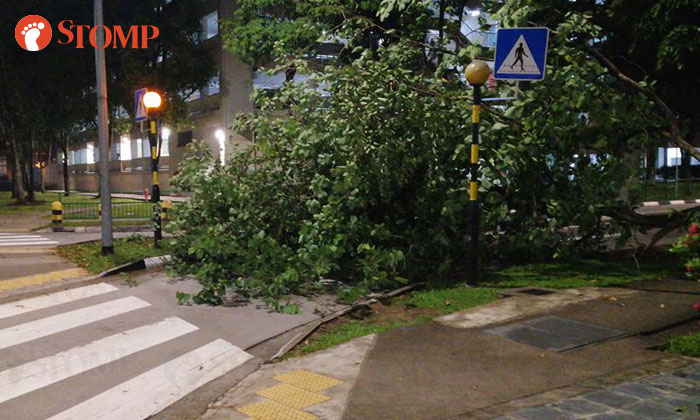 Motorists travelling along Dawson Road were forced to make a U-turn after a tree fell onto the road on Wednesday night (Apr 24).

Stomper Johan was on his way to Dawson Place when he noticed cars turning around.

"When I walked closer I realised a tree had blocked off the road," he said.

"It had been raining earlier in the evening but the skies were clear when I saw the fallen tree."

The National Environment Agency (NEA) reported thundery showers over the southern, western and central parts of Singapore in the late afternoon.

Johan told Stomp that when he left the mall about 45 minutes later, he saw the area around the tree had been cordoned off and people were working to cut it.

"The tree seemed pretty old as the trunk was quite thick," he said.

"It's surprising that the rain might have caused it to fall."

This incident comes one day after a huge tree fell onto a multi-purpose hall where a funeral wake was being held in Choa Chu Kang.

A heavy downpour had also been reported earlier that day.