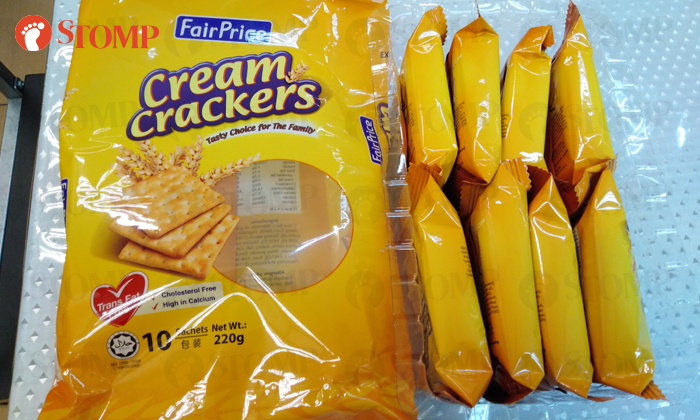 FairPrice has responded to feedback from a shopper who found a shortfall of cream crackers that she purchased from the supermarket chain's outlet at Lot One Shoppers' Mall.

"The packaging indicated 10 sachets per packet but I later realised that both my packets contained only eight sachets each.

"I took a photo and returned to the outlet of purchase. The supervisor requested that I bring everything down, including the wrapper and all.

"I bought two more packets on the spot. True enough, one of them contained only eight sachets. It was only then that the store was willing to make up for the shortfall."

In response to a Stomp query, a FairPrice spokesman said: "As a responsible retailer, product integrity is important to FairPrice and we take this matter very seriously.

"We have since removed the batch of product-in-question from the shelves while we conduct further investigation.

"To safeguard the interests of our customers, we have in place a policy where we will honour a full refund or exchange for products that are of an unsatisfactory quality."

Customers may also reach FairPrice at its customer relations hotline at 6552 2722 or through email at general.feedback@fairprice.com.sg for any queries.