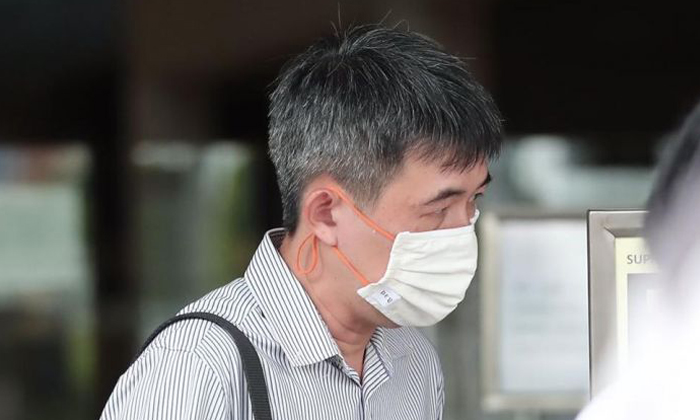 A former private-hire driver with Grab has been accused of sexually assaulting and trying to rape a drunken 19-year-old passenger in his car's backseat.

Tan Yew Sin, 46, went on trial in the High Court on Tuesday (Sept 29) on one count each of attempted rape, sexual assault by penetration and outrage of modesty. He is accused of committing the offences in the early hours of May 19, 2018.

The married father-of-three admitted that he had fondled the victim, inserted his finger into her and tried to have sex with her in his Kia Carens, but claimed that she participated in some of the acts, the High Court heard.

Prosecutors said Tan's likely defence is that he believed that the woman consented to the acts.

Deputy Public Prosecutor Chew Xin Ying contended that there were "clear and obvious signs" that the woman was so intoxicated that Tan must have known that she was not in a position to consent to any sexual activity with him.

The DPP said the prosecution will be seeking to admit two police statements to prove that Tan observed the woman's "erratic behaviour" before committing the offences.

"Driven by lust, the accused took advantage of the victim. The accused cannot argue that he, in good faith, believed that she consented, even if his claim that she participated in the sexual acts is accepted," said the DPP.

The woman cannot be named because of a gag order to protect her identity.

The court heard that a male friend of the woman had booked a Grab car to pick her up from a bar at Seletar Aerospace Park and take her home to a condominium in Jalan Loyang Besar.

Tan accepted the booking and when he reached the bar, the friend told the driver that the woman was drunk and that he had passed her a plastic bag in case she needed to throw up.

After the woman boarded Tan's car, she lay down in the backseat and started crying.

During the ride, Tan tried to engage her in conversation and asked if she had just broken up, but she did not respond.

She fell asleep during the journey and was woken by Tan when they reached her destination.

Despite tapping her pouch against the card reader at the side gate, the woman could not enter the condominium. She ended up squatting on the ground and began crying.

Tan took her back to his car, as she continued crying.

According to Tan's statements to the police, she became agitated and banged her head against the window, so he went to the backseat to console her.

He then went through her things and found her identity card.

Instead of helping her return to the address stated on the card, he put it back into her handbag and tried to have sex with her, but could not perform sexually.

Tan then drove to a more secluded area and after stopping the car, he got into the backseat again and fondled her, but she pushed him away.

After some time, she regained some of her senses, and Tan helped her to enter the condominium through the side gate.

But, instead of going home, the woman "inexplicably" went to the toilet near the swimming pool, left her things there, and walked out of the condominium.

She was later found lying in the middle of the road some distance away by another private-hire driver, who called the police and waited for paramedics to arrive.

"She was barely conscious, and her panties and safety shorts were missing. The victim did not know who removed them or how, or where they were," said the DPP.

A blood test later showed that she had 26mg of alcohol per 100ml of blood.

An Institute of Mental Health report estimated that her blood alcohol content at about 3am ranged between 132.2mg and 155.9mg per 100ml of blood.

Dr Christopher Cheok's opinion was that she was significantly intoxicated and not capable of giving consent at the time.

Related Stories
Doctor accused of raping and molesting patient cleared of charges
Nightspot cashier saw 2 guys raping unconscious clubber at Downtown East chalet -- and filmed them
Youth had sex with intoxicated girl, 'offered' her to another guy and let 2 others rape her
More About:
Rape
sexual assault
grab
court