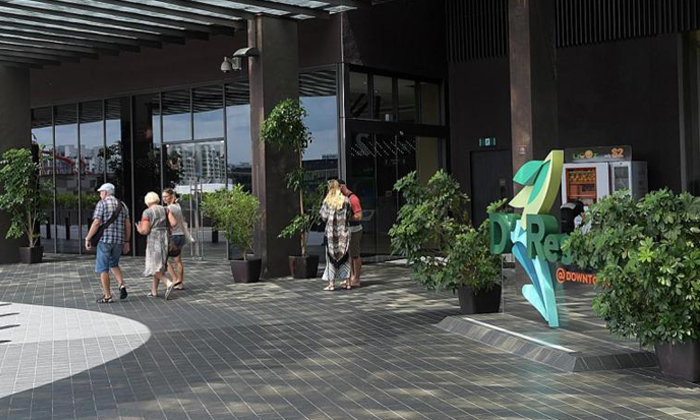 A nightspot cashier was resting in a chalet at the D'Resort @ Downtown East when he saw a colleague and another workmate's friend sexually assaulting an unconscious woman.

Instead of telling the men to stop, Gan Soon Chai took out his mobile phone and recorded a video of the incident.

The Malaysian put away his phone about three minutes later when one of the men noticed him filming them and told him to stop.

Gan, 34, was sentenced on Tuesday (Aug 13) to 15 months' jail and a fine of $20,800. He pleaded guilty to one count each of making an obscene video clip as well as being in possession of 65 other obscene films and eight uncertified films.

If Gan, who worked at Club V5 Tycoon in Cuscaden Road, is unable to pay the fine, he will have to spend an additional three months and four days behind bars.

The court heard that after the club closed at around 7am on Sept 17 last year, Gan, Yong and Tay left in a car to pick up Yap, who was with the 24-year-old woman. The Straits Times understands that the woman was a patron at the club.

Deputy Public Prosecutor Lee Zu Zhao told District Judge Ow Yong Tuck Leong that Gan noticed the woman was unconscious as they made their way to the chalet in Pasir Ris.

According to court documents, Tay, Yap and Yong touched her breasts before they arrived at the destination at around 7.30am.

The DPP said that Yap took the woman to a bed in the chalet and raped her. He added that Tay also sexually penetrated the woman soon after.

Gan, who was resting on another bed, then took out his mobile phone and recorded the acts.

DPP Lee said: "The accused continued to film the sexual assault by Yap and Tay... for about three minutes before Tay noticed what the accused was doing and told the accused to stop.

"Shortly after, Yap and Tay stopped their sexual assault... and Tay brought the victim into the toilet and closed the door."

At around 9am, the woman took a taxi home and she later made a police report.

Gan was arrested on Sept 26 last year and officers extracted 74 videos from his mobile phone - including the one on the woman's ordeal.

The DPP said that 65 of the videos were found to be obscene while another eight were uncertified. Gan, who was unrepresented, pleaded for a lighter sentence on Tuesday.