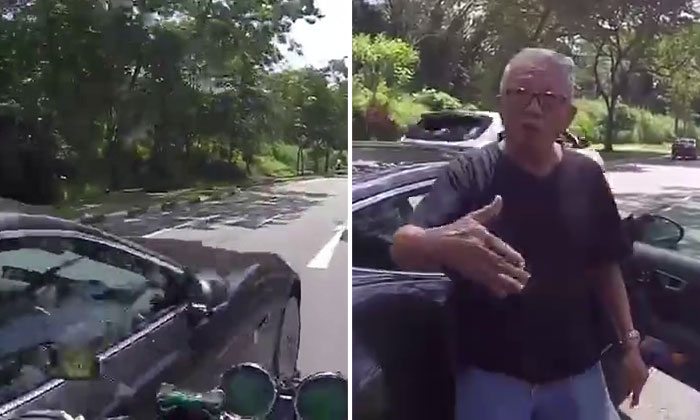 An elderly Jaguar driver and a motorcyclist were involved in a road dispute along Yio Chu Kang Road on Apr 9 at around 11.45am.

The rider, who goes by SinfulWorld Sinner on Facebook, posted his account of what happened along with videos and photos of the incident.

In the videos, he is seen overtaking the Jaguar driver from the left in order to turn right later.

The driver then decides to overtake the motorcyclist from the left and ends up sideswiping him.

Fortunately, he did not lose his balance but according to his post, the rider said that his crash bar was damaged.

He sounded his horn at the driver who pulled over and got out of the car and said, "Why you driving like that (sic)?"

The rider then said to the driver, "I cut, I signal, I go.

He added: "What's your clearance distance? How can you cut me so close?"

The elderly man accused the rider of "blocking" his car to which the rider explained that he wanted to turn right at Cactus Road and then the video ends.

In his post, the rider claimed that the driver told him he would not compensate "a single cent" for the damage and blamed him for "swerving left to right".

"This ARROGANT JAGUAR [driver] was in denial even after me saying that I have a camera recording and he wasn't even apologetic for his reckless actions which could have [cost] me my life."

He said that he was sharing what had happened to warn other road users of the driver.

In the comments section of the post, some netizens have slammed the driver for his "reckless" driving and for being a "bully".

However, others suggested that the motorcyclist could have given way to the Jaguar and changed lanes after the driver had passed.

What are your thoughts on the incident?

Related Stories
Van driver swerves towards cyclist who made hand gestures at him
Woman blocks driver's way at Caltex Tampines while on the phone -- then scolds him for honking
Caltex investigates BMW driver’s dispute with Tampines station staff over $135 petrol
More About:
dispute
reckless driving
argument
elderly
accident
motorcyclist