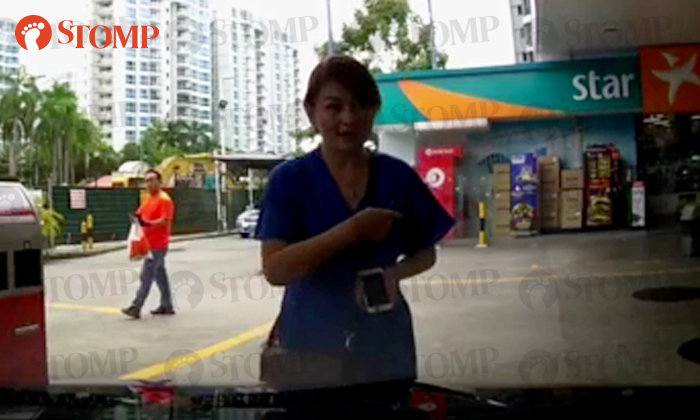 Stomper Desmond was chided by a female driver at Caltex Tampines on April 14, after he honked at her for blocking the way.

The incident occurred at the Tampines Avenue 8 petrol station at around 1.50pm.

Desmond had honked at the woman as she was too engrossed in her phone to notice that she was blocking his way to the petrol pump machine.

He said: "I was very patient and waiting for the lady so that I could go to my desired pump machine. However, she suddenly stopped walked back. Therefore, I gave a honk.

"She was pissed that I honked and started scolding me. She was also blocking me from parking properly.

"In the first place, I don't think she knew that my car was behind her as she was so engrossed in her phone."

Desmond contributed a video that shows the woman scolding and pointing at him.

According to him, the woman said that he should not have honked at her as she was walking.

"She then went inside the station to pay for her petrol," added the Stomper.

According to online reports, using your phone at petrol stations does not cause fires.

Claims that the microwaves emitted from mobile phones could generate a spark that could ignite petrol fumes are simply an urban legend.

"Microwaves from a mobile phone are at a very low intensity, something like 2.45GHz. In order to create that kind of spark, you need a very high-powered microwave. There is no scientific evidence to say that mobile phone emission is enough to create a spark," said electrical engineering professor Dr Chandima Gomes.

This is the second dispute reported at Caltex Tampines recently.

On the same day at around 2pm, a BMW driver was seen in an alleged dispute with a petrol pump attendant at the kiosk.

The BMW driver reportedly claimed that the employee had "mistakenly refilled a full tank of petrol costing about $135 for his vehicle instead of the $10 petrol that he had instructed."

As such, the pump attendant offered to let the customer pay just $10 while he absorbed the remaining $125 from his own pocket.

Caltex Singapore said in a statement that the incident was under investigation and that the attendant "did not bear any financial obligation from the events that occurred on April 14."