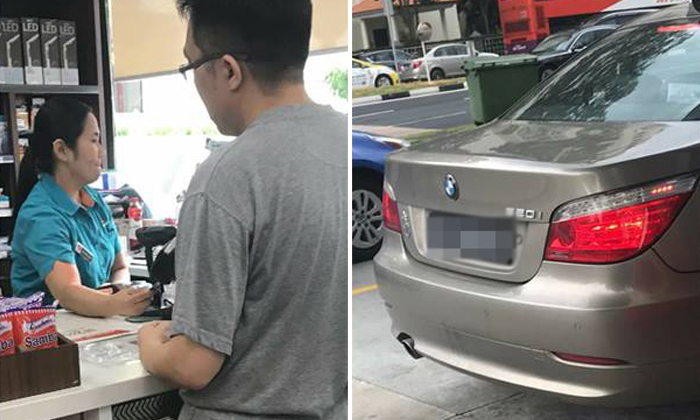 Many Stompers have offered to pay the sum of $135 on behalf of the petrol pump attendant.

Read the full update here: Stompers rally behind Caltex pump attendant in dispute with BMW driver, offer to pay $135 for him

An incident during which a BMW driver disputed the cost of the petrol that was pumped into his vehicle at Caltex Tampines yesterday (April 14) is under investigation by the company, a Chevron spokesman told Stomp.

A woman witnessed the incident, which occurred at Tampines Avenue 8 at around 2pm, and posted about it on Facebook.

The original post has since been removed but a reposted version is still available online and has garnered over 23,000 shares. Several Stompers also alerted Stomp to it.

According to the Facebook post, the BMW driver claimed that "a pump attendant had mistakenly refilled a full tank of petrol costing about $135 for his vehicle instead of the $10 petrol that he had instructed."

The pump attendant, who is apparently in his early 60s, reportedly told the petrol station's cashier that it was a "full tank refill", which "the customer immediately rebutted".

Said the witness: "What happened next astonished me.

"Instead of creating a scene by engaging in an argument with the customer, the elderly pump attendant calmly informed the cashier to let the customer pay $10 and he would personally absorb the rest of the cost.

"As a result, the customer walked away smugly paying a mere $10 payment for a full tank of petrol for his BMW Series 5 vehicle."

Praising the staff's "collected composure and professional customer service", the witness also raised concerns over why the pump attendant had to pay for the petrol from his own pocket.

"The customer could have responded gentlemanly and be gracious to forgive by paying for the petrol since his vehicle would need to consume it anyway," said the witness.

"Alternatively, he could have paid for a partial amount instead of making the elderly pump attendant bear the full $125. Unfortunately, this was not so."

In response to a Stomp query, a spokesman for Chevron, which owns Caltex, said: "At Chevron, we place the highest priority on the health and safety of our workforce, and the protection of our workplace and our communities.

"This extends to conducting our business in a manner that values and respects both our customers and employees.

"Our station manager, together with the management team are looking into the incident on April 14 and an investigation is ongoing.

"We want to assure the community that our Caltex attendant did not bear any financial obligation from the events that occurred on April 14."

Related Stories
Man who scolded McDonald's staff: "They slammed the table for payment, I was not wrong"
"I didn't mean to dispute with uncle," says sobbing woman who bullied elderly man at Toa Payoh hawker centre
SingPost postman sacked after he was caught on video throwing away mail at condo
More About:
petrol kiosk
Tampines
BMW
driver
dispute