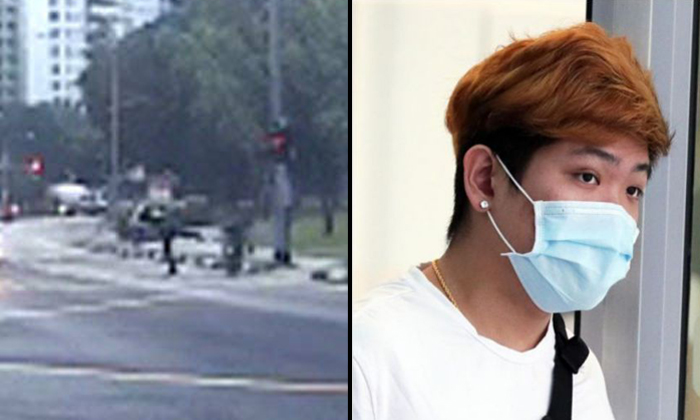 The case of the Certis officer who brought down a speeding personal mobility device (PMD) rider with a kungfu-style kick in 2019 has finally reached closure, with the rider jailed for six days and the officer dismissed.

A video of the incident, captured by a vehicle dashcam, was shared widely on the Internet.

In response to queries from The Straits Times, a Certis spokesman said the police issued its enforcement officer with a 12-month conditional warning on June 18, 2020, for committing a rash act. He was dismissed from Certis the same month.

"The officer is no longer under the employment of Certis," the spokesman said, adding that Certis has a zero-tolerance policy against excessive use of force and will take stern action against officers breaching protocols.

Meanwhile, the rider, Goh Ting Feng, 28, was sentenced to six days' jail on April 6, 2021, for riding an unregistered and non-compliant PMD on public roads, and for committing a rash act, said the Land Transport Authority (LTA).

An additional charge for failing to stop his device when required to do so was taken into consideration. His PMD has since been forfeited by the authority.

He also did not stop when ordered by auxiliary police officer Kishok Kumar Ragu to do so.

In a video clip posted on SG Road Vigilante, a Facebook community page, a uniformed officer - identified in a court statement to be Mr Kishok - is spotted running across the dual-carriageway as the rider approaches the junction at significant speed.

As the rider nears the junction without slowing down, the officer is seen side-kicking him. The rider loses control and his scooter hits the kerb, sending him tumbling onto the pavement behind some shrubs.

Both men were injured.

Netizens were divided, with as many praising the officer for his decisive action, as there were chastising him for his rash act. As at March 2021, the video clip had garnered more than 170,000 views on YouTube.

Asked what measures Certis has in place to apprehend errant riders who do not stop when ordered to, the agency appointed by the LTA for enforcement work said that it has standard operating procedures in place to deal with such scenarios.

But it would rather not divulge them, lest they compromise future enforcement efforts.