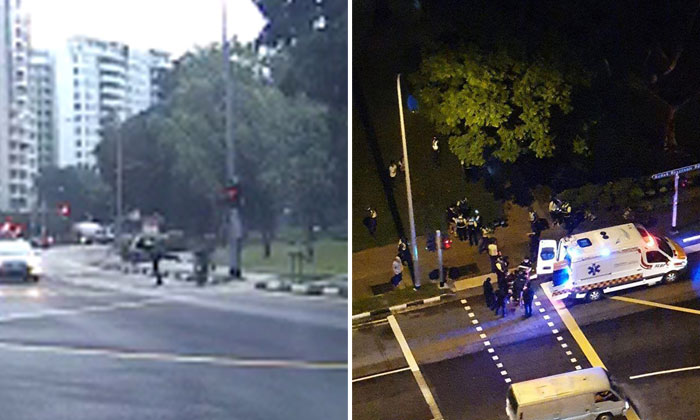 Certis told Stomp it has suspended one of its officers who was seen kicking a personal mobility device (PMD) user off his device along Bedok Reservoir Road on Tuesday (Dec 10).

In the video, one of the Certis CISCO officers runs across a pedestrian crossing and kicks the oncoming PMD user who is riding on the road.

He is seen flying off his device and landing on the ground before standing up.

Stompers also shared with Stomp a photo of an ambulance at the scene after the incident took place.

In response to a Stomp query, the Singapore Civil Defence Force (SCDF) said that they received a call for assistance at the junction of Bedok Reservoir Road and Bedok Reservoir View at about 6.55pm.

"A man was taken to Changi General Hospital," an SCDF spokesman said.

A spokesman from Certis told Stomp that the rider suffered abrasions on his right elbow and right knee and received medical attention from paramedics at the scene.

The officer was also injured and treated at the scene before being taken to hospital for further medical assistance.

"They encountered a Personal Mobility Device (PMD) user who endangered public safety by riding on the road at high speed.

"The rider ignored repeated instructions from the officers to stop as his actions could cause serious injuries to members of the public or himself.

"A Certis CISCO officer who was stationed at the next junction resorted to kicking his device when the rider refused to stop.

"The rider suffered abrasions on his right elbow and right knee and received medical attention from paramedics at the scene.

"The officer was also injured, and was treated at the site before heading to the hospital for further medical assistance.

"Established enforcement protocols require officers to note down the appearance of the escaping PMD user as accurately as possible, and lodge a report with LTA.

Certis has a zero-tolerance policy against rash acts and will not hesitate to take stern action against officers who are found to be in breach of protocol.

"A disciplinary inquiry will be conducted for this incident, and we are providing full assistance to the Police in their investigation.

"The officer has been suspended from active duties."

The Land Transport Authority (LTA) told Stomp it is investigating offences committed by the PMD rider, which include riding an unregistered and non-compliant (30.54kg) PMD on public roads and failing to stop his device when required by an officer.

The police are investigating the incident.