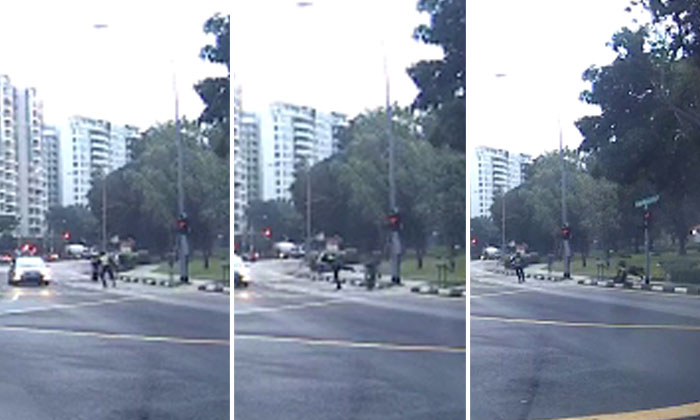 The Land Transport Authority (LTA) told Stomp it is investigating offences committed by a personal mobility device (PMD) rider who was sent flying after a Certis CISCO auxiliary police officer kicked him off his device along Bedok Reservoir Road on Tuesday (Dec 10).

The rider will be investigated for riding an unregistered and non-compliant PMD weighing 30.54kg on public roads and failing to stop his device when required by an officer. The e-scooter has been impounded.

Stomp earlier reported that Cisco suspended the officer involved in the incident.

In a video circulating online, the officer is seen running across the road as the PMD user approaches the junction at a significant speed.

He is then seen side-kicking the rider, causing him to lose control and fly off his device and onto the pavement.

The rider suffered abrasions while the officer was taken to hospital for further medical assistance.

In response to a Stomp query, an LTA spokesman said:

"The APOs spotted a male Personal Mobility Device (PMD) user riding on the road near the junction at Bedok North Avenue 3.

"When signalled by the APOs to stop, the rider took evasive action.

"He was subsequently stopped by another APO stationed at the next junction.

"LTA, SPF and Certis are looking into the incident. Certis is contracted by LTA to carry out enforcement.

"LTA does not condone any behaviour that deviates from the established rules of engagement.

"LTA is also investigating offences committed by the PMD rider, which include riding an unregistered and non-compliant (30.54kg) PMD on public roads, and failing to stop his device when required by an officer.

"The PMD involved has been impounded."