E-scooter rider who died after accident with bus in Kaki Bukit was 'kind-hearted, helpful and friendly' 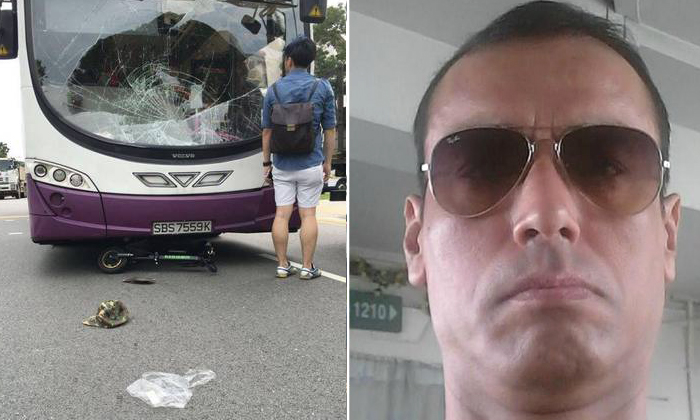 The e-scooter rider who tragically lost his life in an accident with a double-decker bus at Kaki Bukit yesterday (Nov 30) was described as 'kind-hearted, helpful and friendly' by his cousin, Ms Fauziah Mohammed Mydin.

Mr Zanri, another cousin of the victim told The Straits Times that the victim, Atan Amat, had been working as a cleaner at an SMRT depot. He was not married and lived with his younger sister, his only sibling.

Mr Zanri said the family was busy arranging the funeral and added that prayers for the Mr Atan will be held at his Bedok home this afternoon.

The SBS Transit bus was travelling along Bedok Reservoir Road towards Kaki Bukit at around when the accident occurred.

The 52-year-old victim was conveyed to Changi General Hospital where he later died.

A new video which was sent to us by Stomper Terrance shows the scene of the accident where passer-bys were spotted attending to the victim.

Upon seeing the accident, Terrance called for an ambulance.

Senior vice-president of corporate communications at SBS Transit, Ms Tammy Tan said in a statement that the bus operator was "very sad that this happened".

According to Ms Tan, SBS Transit representatives were at the hospital with Mr Atan's family yesterday to render assistance.

SMRT's vice-president of corporate communications Patrick Nathan said the transport operator will also be reaching out through Mr Atan's agency to "convey our condolences to his family".

There were about 90 accidents in the first half of this year involving electric bicycles and personal mobility devices.

The accidents resulted in four deaths and about 90 injuries, said Transport Minister Khaw Boon Wan in Parliament in October.