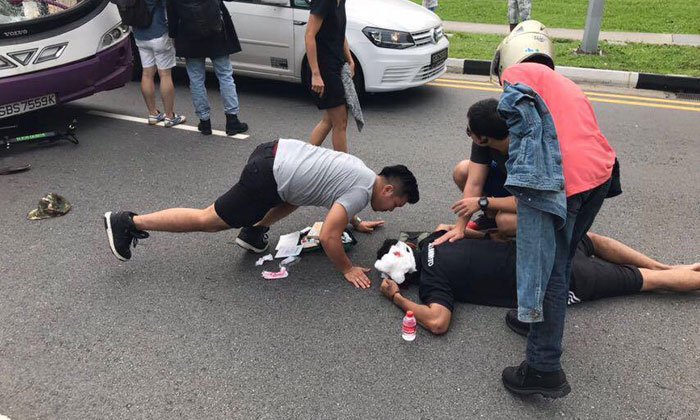 An e-scooter rider died after he was involved in an accident with an SBS Transit double-decker bus at the junction of Bedok Reservoir Road and Kaki Bukit Avenue 1 today (Nov 30).

In response to Stomp's media queries, a police spokesman said

"On Nov 30 at 10.28am, the police were alerted to an accident involving a bus and an E-scooter at the junction of Bedok Reservoir Road and Kaki Bukit Avenue 1.

"A 52-year-old male rider was unconscious when conveyed to Changi General Hospital (CGH), where he subsequently succumbed to his injuries.

According to The Straits Times, the man suffered head injuries.

Photos of the incident were posted on Roads.sg's Facebook page showing the e-scooter pinned under the bus.

A few passers-by stopped to assist the fallen e-scooter rider and one man held a piece of cloth the man's head.

This comes after a series of concerning videos of e-scooter riders travelling on the roads.

Previously, a 41-year-old woman riding an e-scooter was injured in an accident with a car along Serangoon Road on Oct 20.

Ms Tammy Tan, senior vice-president of corporate communications at SBS Transit, told The Straits Times that the bus operator was "very sad that this has happened".

"We are currently at the hospital with his family to render assistance as best we can," she said. "Meanwhile, the police are investigating the accident."

Stomp understands that the bus driver had the right of way when the e-scooter rider dashed in front of the bus.