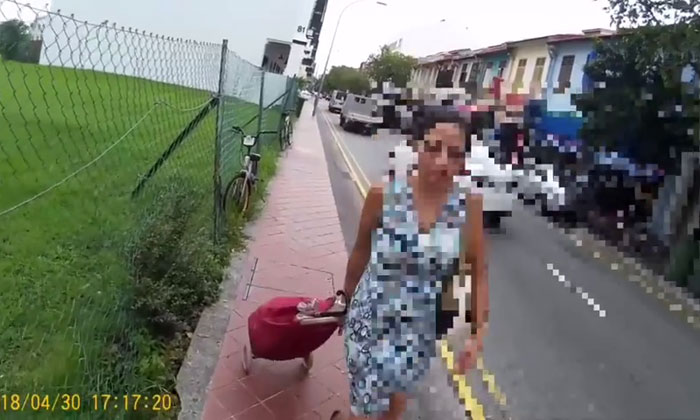 An e-scooter rider intending to show how he is not a "black sheep" of the e-scooter community ended up having his efforts backfire when he posted a video online.

The rider's video was reposted on ROADS.sg's Facebook page with the caption:

"The purpose of this video is to show everyone that not all e-scooter riders are black sheep of the community and I do try my best.

"Unfortunately, there will always be someone who thinks it's not enough, or even wanting me to dismount 20 meters ahead of pedestrians (I kid you not)."

In the video, the rider is travelling down a narrow pedestrian path.

He then sees a woman walking on the pavement towards him and rings his bell at her.

When they pass each other, the pedestrian admonishes him and says: "It is not a cycling route here."

He then tells her he's not riding a bicycle which he says are supposed to be on the street.

In his post's caption he wrote:

"Hopefully, with my video submission like this, my hope for the public is to see what we experience from our point of view also."

Unfortunately for him, most netizens did not.

Netizens slammed the rider for expecting pedestrians to give way to him simply because he rings his bell at them.

One Facebook user fired his "logic" back at him:

Ironically, it seems by trying to prove how law-abiding he is as an e-scooter rider, he still ended up being seen as one of the "black sheep" in the community.

Related Stories
Stomper angered at e-scooter rider who 'blatantly' rode on road in Hougang
Parents, this is how your kids might be behaving on the roads
E-scooter riders behaving recklessly on roads still a common sight
More About:
e-scooter
PMDs
pedestrians