Parents, this is how your kids might be behaving on the roads 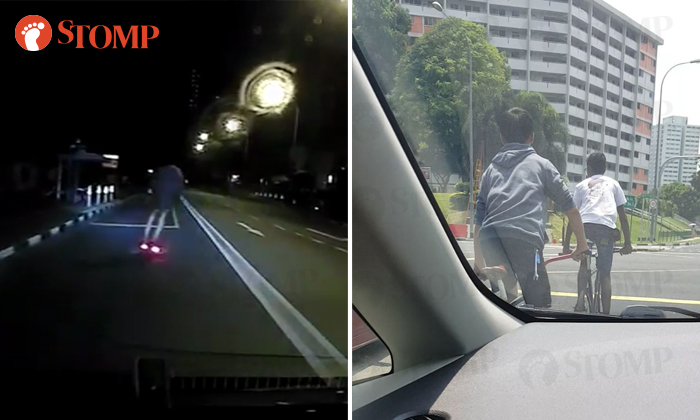 Do the parents of these youths know how recklessly they are behaving on the roads with their bicycles and e-scooters?

Dan said he was turning right from Stagmont Ring into Choa Chu Kang North 6 at 4.15am on Jun 2, when he witnessed two e-scooter users speeding on the road.

In a video shared by Dan, the first rider is seen zooming past the car, before another rider came along.

"These two Personal Mobility Devices (PMD) riders were recklessly riding on the road and out of nowhere, one of the riders even challenged me and overtook my vehicle.

"Luckily I was going at a slow pace.

"This is an accident waiting to happen and shows that they have no regard for the rules."

C said she was at Ang Mo Kio Avenue 10 at 1.40pm yesterday (Jun 3), when she saw two teenagers weaving through vehicles on their bicycles.

"It was near Chong Boon Market, opposite Block 455A Ang Mo Kio Street 11.

"The two teenagers were riding their bicycles between our car and another car.

"The way they behaved on the road is dangerous, and they are a hassle to road users as well.

"They are putting themselves in a risky situation by not observing traffic rules, such as cycling at the side of the road and at a safe speed.

"No safety helmets were worn too.

"Parents of the teenagers must educate their children about road safety before things happen and then it will be too late to regret their actions."

Related Stories
E-scooter riders behaving recklessly on roads still a common sight
Woman cycles against traffic along Upper Bukit Timah Road -- and past a bus
This kid on e-scooter wants to be the next Fast & Furious star
More About:
e-scooter
bicycle
reckless
dangerous