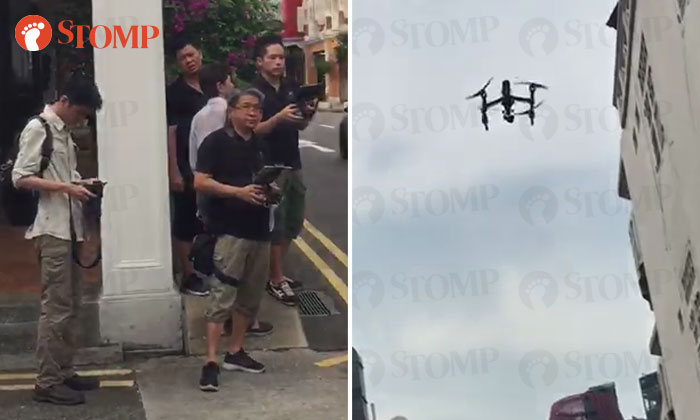 The Civil Aviation Authority of Singapore (CAAS) is investigating an incident where a group of people were seen flying a drone over Kreta Ayer Road on Aug 17.

After the original article was published with the statement from CAAS, the company of the crew that was flying the drone, K.Kopter, responded and said that they were operating the unmanned aircraft with permits and within CAAS guidelines.

A Stomper had first alerted Stomp to the incident. He said that he was sightseeing in the area when he noticed a group of people flying a drone above the Sri Layan Sithi Vinayagar Temple.

The men wore shirts with the words K.Kopter on it which is a company that specialises in aerial photography and videography.

Feeling that the drone was flying too low at some points, the Stomper told the group that he thought that it was dangerous as there were many people in the area.

"They could not accept my simple feedback and became unhappy," said the Stomper.

One of the crew members approached the Stomper and asked, "What do you want from us?" before taking out his phone to film him back.

A woman added: "We are working, let us work."

Feeling intimidated, the Stomper backed away.

"I was just giving them my two cents worth," said the Stomper.

According to the CAAS website, people operating unmanned aircraft should not fly them over any crowd.

"For all commercial unmanned aircraft (UA) activities, a valid Operator Permit and Class 1 Activity Permit from CAAS are required. CAAS is aware of this case and investigations are ongoing.

"All UA operators are reminded to conduct their activities in a safe and responsible manner. Guidelines on how to operate UA safely and responsibly, as well as details on the UA permit regime in Singapore, may be found on the CAAS website at www.caas.gov.sg/caas/en/ANS/unmanned-aircraft.html. If in doubt, operators may also contact CAAS at caas_uapo@caas.gov.sg."

K.Kopter responded to the incident in a press release:

"K.Kopter would like to clarify to the public that we were operating our unmanned aircraft on Aug 17 (around Chinatown area) with approved Unmanned Aircraft Operator Permit (CAAS Ref: UOP/0056) and Activity Permits (CAAS Ref: 4340 & 4339).

"We conducted our aerial videography within CAAS guidelines throughout the flight.

"CAAS will be conducting an interview with K.Kopter on Aug 24, as a formality and as standard protocol whenever a complaint is received from the public."