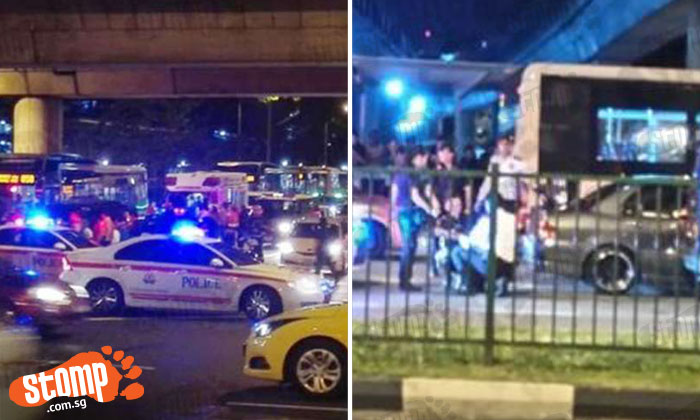 The accident beside Yishun MRT station that left three people including two traffic police officers injured occurred after a driver sped through a police roadblock.

Stompers Jeremia and Stephen who were at the scene of the accident on Aug 16 sent photos and shared their experiences with Stomp.

According to the Stompers, the accident occured after the driver of a car hit a van while being chased by the Police.

Stomper Bam who was at the void deck of Blk 122 Yishun St 11 caught a glimpse of the chase and shared a video with Stomp.

In a telephone interview, Stomper Jeremia reported that policemen were searching the car's boot for something after the collision.

The Police have released a statement with regard to what happened.

"In response to media queries, the Police confirm that a road block was conducted along Sembawang Road on 16 August 2016. A 28-year-old male driver refused to comply with the officer’s instruction at the road block and sped off.

"In the ensuing pursuit, an accident involving the male driver’s car, 1 van and 1 taxi occurred at the junction of Yishun Ave 5 and Ave 2 at about 11.03pm.

"The actions of the errant driver had endangered the lives of the road users and our Police Officers. Following the accident, the male driver put up a violent struggle and assaulted the Traffic Police officers in an attempt to evade arrest.

"The male car driver and 2 Traffic Police officers were injured and conveyed to the hospital. The male driver was subsequently arrested for traffic and drug-related offences.

"The Police would like to advise members of public to cooperate with us when approached by officers. Any evasion of a road block can cause potentially serious harm to other road users and also to our Police officers.

"The Police also take a serious view of members of public who abuse public servants. Any person convicted of an offence of Voluntarily Causing Hurt to a Public Servant shall be punished for a term which may extend to 7 years, or with fine, or with caning, or with any combination of such punishments.

"Perpetrators who assault public servants or public service workers can be expected to be dealt with to the full extent of the law."