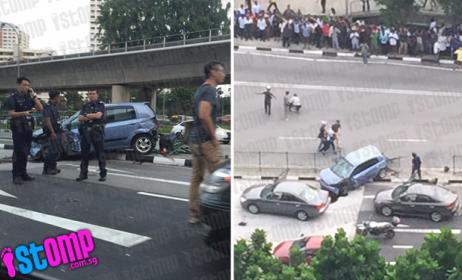 Stompers Emily and Jurong resident thought that they were looking at an accident scene at Boon Lay Way at around 5.50pm yesterday (May 01).

But what they both saw was the aftermath of a Central Narcotics Bureau (CNB) drug bust.

According to Emily, the accident involved a Honda Civic and Hyundai Getz.

Stomper Jurong Resident told Stomp that she had heard a loud thud from her flat and noticed that a blue car had crashed into the road divider.

In a phone interview with Stomp, the Stomper said:

"I saw a blue car crash into the middle fence, strangely in the opposite direction. The driver of the blue car immediately opened the door and started running.

"Then four men from the grey vehicles ran out of the car and started chasing the man. They managed to catch him and dragged him back and put him into one of the grey cars."

Here is the CNB statement which sheds light on the incident:

"Earlier this evening (May 01), a 26-year-old suspected male drug trafficker who was trying to evade arrest, crashed his car into CNB Officers’ vehicle along Boon Lay Way, before hitting a member of public’s car.

"Both the suspect and the family of four in that car were sent to the hospital for checks.

"Suspect is now under CNB’s custody and will be investigated for drug trafficking."