Suzuki driver jams on brakes for no reason, causing cabby to crash into him 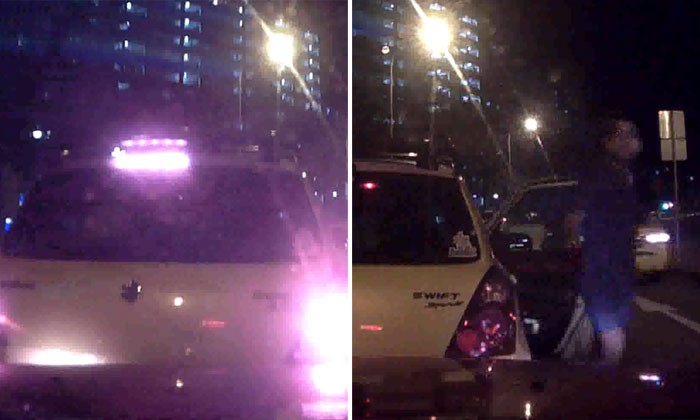 A Suzuki Swift driver cut into a taxi's uncle lane at Tampines Avenue 5 yesterday (Dec 26) and suddenly jammed his breaks in front of the taxi causing the taxi to hit his car.

Stomper Jeff shared with us a video from Singapore Taxi Drivers Facebook page posted today (Dec 27) showing how the driver had stopped his vehicle for no reason at all as an empty road laid before him.

An anonymous Stomper also received the video from her friend who is a relative of the taxi driver involved.

The taxi driver was picking up two passengers when the Suzuki driver cut into his lane.

The Suzuki driver drove on and the taxi driver continued on his journey but he crashed into the Suzuki after the Suzuki stopped unexpectedly.

The Suzuki driver SGM1105Z driver got out of his vehicle and begin gesturing to the taxi driver.

The taxi driver could also be seen out of the taxi, assessing the damage done to the car.

Jasmine said, "The taxi driver was just trying to earn money for his family."