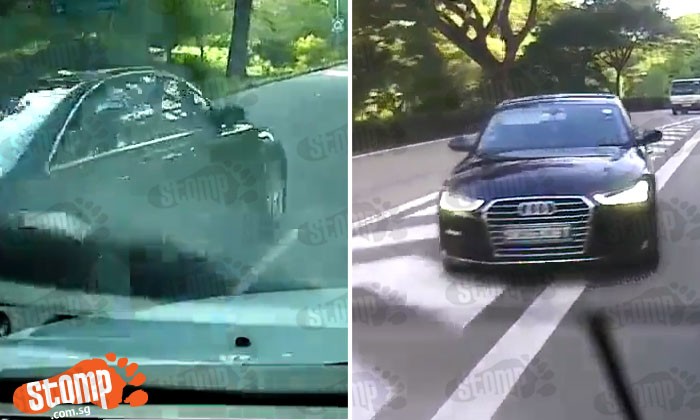 Stomper Alfred was driving on the Ayer Rajah Expressway (AYE) two days ago (Dec 13) at around 5pm when he noticed a reckless driver who was driving an Audi, broke three traffic rules consecutively.

The Stomper captured all of the driver's mistakes along with his licence number, SKS6308T, in a video which he had sent to Roads.SG.

According to the Stomper, the driver was speeding on the last lane to enter the expressway.

However, he seemed to have changed his mind at the last minute because he cut across a white Chevron marking to enter Lower Delta road, almost causing a collision.

He proceeded to cut in front of Alfred's lane without signaling while both the Stomper and the driver were approaching a traffic light junction.

Finally, his last offence was driving straight into the entrance of AYE using a lane which clearly indicates that it is a lane for cars to turn right.

The Stomper said, "All the three lanes were for cars to turn right actually and he could have hit any of the cars on that junction."

Alfred has reported the incident to the traffic police.