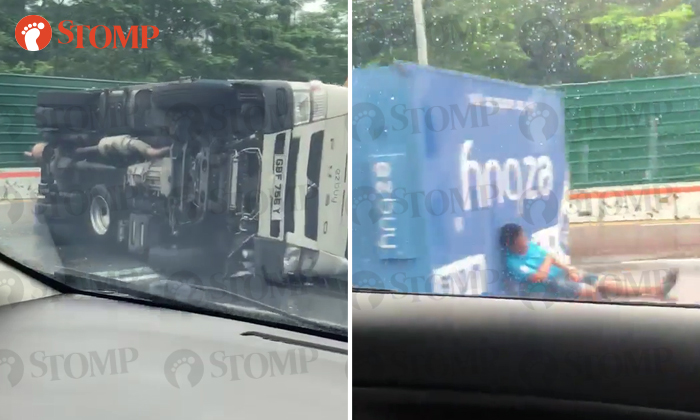 A 30-year-old man was taken to hospital after the lorry that he was driving overturned along Lornie Road on Monday morning (May 28).

Stomp understands that the lorry had skidded and no other vehicles were involved in the accident.

Stomper Khoo was driving past the scene at around 11.30am and contributed a video that shows the ezbuy lorry flipped on its side.

A man, dressed in what is believed to be the blue uniform of the online shopping retailer, can be seen lying against the lorry.

In response to a Stomp query, the police said they were alerted to an accident involving a lorry along Lornie Road, towards Adam Road, at 11.17am.

The Singapore Civil Defence Force (SCDF) told Stomp it was alerted at about 11.20am and dispatched one ambulance to the scene.

The driver was conscious when taken to Tan Tock Seng Hospital.

Related Stories
Driver injured after RedMart lorry flips on its side in Holland Road accident
RedMart lorry driver, 18, and car driver, 77, sent to hospital after accident at AMK
Car and lorry in accident along Bishan Road
More About:
lorry
accident
overturn