RedMart lorry driver, 18, and car driver, 77, sent to hospital after accident at AMK 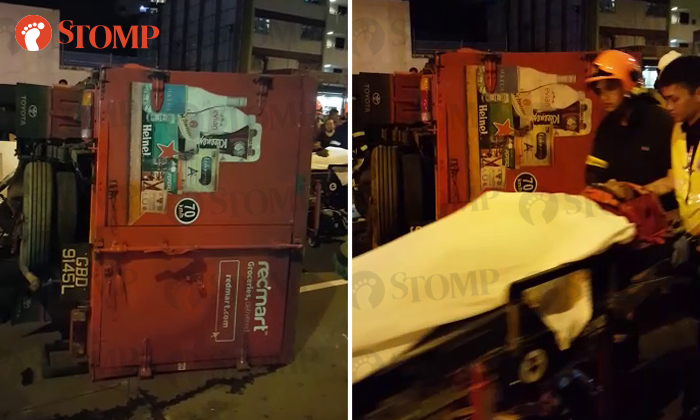 Two men were sent to the hospital after an accident involving a car and a RedMart lorry at the junction of Ang Mo Kio Avenue 4 and Ang Mo Kio Street 11 at around 10pm yesterday (Jan 30).

The 18-year-old lorry driver was trapped in his vehicle and had to be extricated by the Singapore Civil Defence Force (SCDF) using hydraulic tools, an SCDF spokesman told Stomp.

He and the 77-year-old car driver were both sent to Tan Tock Seng Hospital, said the police in response to Stomp queries.

Stomper Win Win, who was at the accident scene last night, contributed a video showing the lorry overturned on its side.

SCDF personnel were also seen taking the teenager away on a stretcher.

"There was a crowd of around 50 people," added Win Win.

"SCDF removed the top of the lorry to rescue the driver, who was trapped inside."