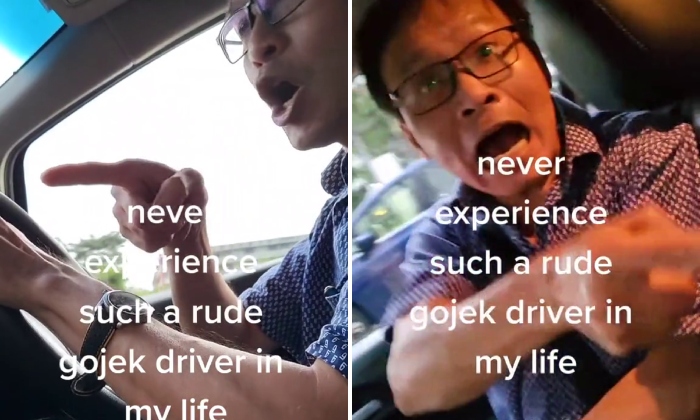 Gojek driver also drove dangerously in 2021: 'He's a road hazard,' says passenger who got raged at

What would you do in a situation like this?

A TikTok video of a Gojek driver arguing with his passenger after the passenger adjusted the car seat and air-conditioner without asking permission has gone viral.

The passenger, whose name is Christopher Seetoh, uploaded the video on Saturday (Jan 7) with the text: "Never experience such a rude Gojek driver in my life."

In response to a Stomp query, a Gojek spokesman said: "We do not tolerate negative outbursts or impolite behaviour of any kind towards passengers or driver-partners.

"We are currently investigating this matter and have reached out to both the parties involved to verify the details of the incident.”

The nearly three-minute video starts with the bespectacled driver driving and scolding the passenger who was in the front passenger seat.

The passenger said: "What did I do? I just shifted the seat back, my legs long."

Passenger: "I just lower a bit the wind speed."

Driver: "You touched my aircon without my permission."

The passenger then said that he waited for the driver for 15 minutes, which the driver dismissed by with a string of "no"s.

After the driver called the passenger "siao" (Hokkien for "crazy") for asking whether the ride has started, the passenger said: "No, you have to send me to my destination, I am not getting out of the car."

The driver asked the passenger to get of the car and threatened to call the police.

The driver then called the passenger "thick skin" six times and repeatedly told him to get out.

The passenger asked: "What the hell is wrong with you?"

The driver replied:  "You are sitting in people's car, you know. You think what? Taxi, ah?"

The passenger said: "I asked you to take the outermost lane you started shouting at me."

The driver called him "siao" again.

The driver said: "I'll ask the police to pull you out."

The passenger quietly alighted and continued taking the video of the Gojek driver driving away in the red Honda.

Related Stories
Uncle using phone while driving: Gojek has spoken to driver and passenger 'to resolve matter'
Gojek driver who left family at cemetery says passenger threatened him with tree branch
Gojek driver allegedly tells family to get out of his car at Muslim Cemetery after argument
More About:
Gojek
passenger
private hire driver
dispute
TikTok